Lady in bread: why Rosanna Davison has the pastry police up in arms

It's all the fault of gluten, says former Miss World Rosanna Davison, as she sets out to put our diets to right 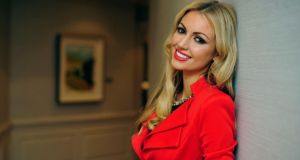 In 2003, Rosanna Davison was crowned the world’s most beautiful woman when she won Miss World. By 2012, with dad Chris de Burgh’s blessing, Davison appeared nude in Playboy Germany. Now it’s baps of a different kind that have got Davison in a spot of bother. The beauty queen suggested in her newspaper column that gluten in food should be avoided.

According to the Irish Independent, Davison thinks sourdough bread is easier on the digestive system and she “cites research that shows gluten to be the bad guy responsible for a huge range of medical conditions from autism spectrum disorders to schizophrenia to arthritis.”

The research in question is not included in the column’s footnotes.

Davison says gluten is the bad guy. And here’s the science bit . . . Davison has done her own research and her spots cleared up after she ditched toast. “For someone else, a gluten intolerance could manifest itself in their joints or muscles, but for me everything shows in my skin first. “Anyway, I stopped eating wheat and within a week or two it had all calmed down,” she wrote.

Even more dramatically, Davison’s husband Wesley Quirke has even seen pain from “rheumatoid arthritis in his knuckles and knees” abate after he went gluten-free, she continued. Not everyone, and not just those who grow wheat, is happy.

“There is no evidence to suggest that the serious auto-immune disease of #RA can be managed through a gluten free diet,” Arthritis Ireland tweeted on Monday.

In fairness to Davison, she hasn’t tried to research any macro-biotic cures for autism or schizophrenia in this week’s column.

She is no stranger to rattling cages, though. Earlier this year, Rosanna angered the dairy farmers of Ireland when she urged the public to eliminate dairy from their daily diet. The advice was branded “bizarre” and “reckless” by John Comer, president of the Irish Creamery Milk Suppliers Association (ICMSA) ,who described Davison’s views as “faddish quackery”.

Davison, who has completed a three-year course in Naturopathic Nutrition and Human Biochemistry, said: “The difference between me and the ICMSA is that I am not trying to sell anything.”

And she wasn’t trying to sell anything – in May. Arguably she is now. Davison’s book Eat Yourself Beautiful, in which she shares her philosophy of plant-based functional nutrition, and her advice for using food “to achieve the potential for health and natural beauty inherent in every individual” is out in the next few days.

The former beauty queen is also keen to develop her brand through her website and Instagram. She has over 90,000 followers, so that is potentially a lot of loaves to see left on the shelf.

“A huge proportion of preventable diseases are attributable to a deficiency in certain nutrients,” says Davison, who is hoping that you will buy the book and whip up a “protein punch pizza” to banish all the nasties.

You will need quinoa, some gluten-free baking powder, a pinch of Himalayan pink rock salt and some organic virgin coconut oil.

But even if you are waiting for the science bit to back up Rosanna’s claims, there’s no denying that she is looking good on it. And if it works for her, the Ballymagash Times asked if it would also work for your dog?

. @rosanna_davison in your professional opinion will this work for my dog that refuses to play fetch? pic.twitter.com/MKJ1uYMZlh

But Davison is not a dog nutritionist. They were only having a laugh. Her expertise has limits.

Wesley Quirke may not find it so funny when Rosanna moves on to the couple’s fertility regime. Davison says she will put her studies to good use when the couple start feeling broody. “I’m healthy and I know how to get my body ready to give myself the best chance. And how to boost Wesley’s fertility too,” she said.

Good luck with the quinoa Wesley.