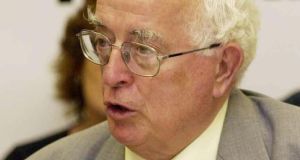 Kevin McNamara: his arrival in the Commons following a byelection came just before the outbreak of the Troubles and for the bulk of his career it was a major focus of his concern. Photograph: PA

Former British Labour Party MP Kevin McNamara, who has died aged 82,probably did more during his long political career than any other British politician of his era to support the cause of constitutional Irish nationalism.

Even though he was sidelined by Tony Blair, his untiring efforts over many decades forced the House of Commons to put Northern Ireland centre stage at Westminster.

Not since TP O’Connor represented Liverpool in the Commons right up to 1929 did an MP from a British constituency made such a contribution to the Irish cause.

McNamara, a native of Liverpool, represented Hull from 1966 until 2005. His arrival in the Commons following a byelection came just before the outbreak of the Troubles and for the bulk of his career it was a major focus of his concern.

McNamara made no secret of the fact that he believed in the unification of Ireland by consent. He was a strong supporter of the SDLP and the Irish government but that made him an unpopular figure Northern unionists.

He had a long-cherished ambition to the last British secretary of state for Northern Ireland and was bitterly disappointed when Tony Blair replaced him with Mo Mowlam as shadow secretary when he took over the Labour leadership in 1994.

‘Fat and bald and green’

Blair told him bluntly that he did not want him in his cabinet. McNamara told friends that he did not conform to the image of the new model Labour party because “I’m fat and bald and green”.

He was demoted to be spokesman for the civil service but resigned after a year in 1995 because of Blair’s bipartisan approach in support of the Conservative government’s policy on Northern Ireland.

Despite being relegated to the backbenches during the Blair period McNamara continued to defend Irish interests. He was an active member of the British Irish Parliamentary Assembly which did a lot to build bridges during the peace process.

The tributes paid to him after his death by Minister for Foreign Affairs Simon Coveney, Minister for Justice Charlie Flanagan and Irish Ambassador to the UK Dan Mulhall reflect the affection and respect in which he was held by successive Irish governments.

McNamara had a spectacular start to his political career as the victor in one of the most important byelections in postwar British parliamentary history, fought in the snowbound streets of Kingston upon Hull North in January 1966.

One of consequences of his unexpectedly large majority was a general election within two months, confirming Harold Wilson in power for a second term.

The construction of the long promised Humber Bridge helped to ensure a 39-year career in the House of Commons for the successful candidate.

A crossing of the river Humber to improve transport links with Hull had been under discussion for nearly a century, and the promise made during the byelection campaign of finance for the project had a dramatic effect on the result. McNamara’s fivefold increase of the Labour majority in what had been a marginal seat was the largest byelection win for any party for more than a decade.

In a combative and controversial maiden speech, McNamara asserted his understanding of the concerns of his electorate. He was himself the son of a seaman and he knew from his own childhood about the lives of the people he represented. He publicly committed himself to the pursuit of social justice, the dignity of the individual and the sanctity of family life, and he resolutely fought for all these causes throughout his years in parliament.

He was an assiduous MP, a fair-minded, kindly, brave man who was proud to call himself a democratic socialist but he also remained true to the Catholic values with which he was reared.

He was born into an Irish immigrant family in Liverpool, one of four sons of Agnes and Patrick McNamara. Kevin was educated by the Christian Brothers at St Mary’s college, Crosby, and joined the Labour Party as a sixth former in 1951.

His long association with Hull began as an undergraduate reading law at the city’s university, where he met Nora Jones, whom he married in 1960. He taught at St Mary’s grammar school (now St Mary’s college), Hull, where he was head of history from 1958 until 1964. He then lectured in law at Hull College of Commerce until the momentous byelection.

He had previously unsuccessfully contested nearby Bridlington in the 1964 general election, which brought Labour into government after 13 years in opposition.

At Westminster, McNamara was a member of the orthodox left wing, a member of the Tribune group, who stood often, if unsuccessfully, on the Tribune slate for the shadow cabinet. He seemed marked for promotion by being picked soon after his election as a parliamentary private secretary to Peter Shore, secretary of state for economic affairs, but his radical instincts and the accidents of political timing meant that he never secured ministerial office.

Wilson did not appoint him to government in 1974 and although he was on the opposition frontbench as spokesman on defence from 1982 until 1987 and on Northern Ireland from 1987 until 1994, the election of Tony Blair as Labour leader sealed his future.

McNamara was also a committed trade unionist, acting as secretary of the parliamentary group of the Transport and General Workers’ Union for more than 30 years, and he further bitterly criticised Blair’s view of the need for neutrality between employers and workers.

He was always a busy man at Westminster. He promoted several private members’ Bills, notably on animal rights, he campaigned against the Act of Succession, which prevents Catholics or their spouses from becoming the monarch, and he was a founder member of the all-party republic group. He was a member of the foreign affairs select committee, chairing the overseas development subcommittee, of the Nato parliamentary association and of the UK delegation to the Council of Europe.

He retired as MP in 2005, having fought 11 elections, and returned to live in Merseyside, in Formby. In 2007 he completed a PhD at the department of Irish studies of the University of Liverpool on the MacBride Principles, a corporate code of conduct for US companies doing business in Northern Ireland.

McNamara is survived by Nora, their sons, Julian, Edwin and Brendan, and their, daughter Brigid. Another son, Kieran, died in 2013.