Even those who claim to be unromantic find themselves learning to share the love once they have trained to preside over the biggest parties of all: weddings 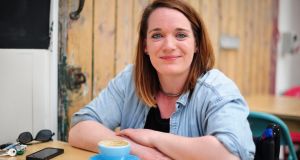 “The most important thing about the ceremony is that the couple get the day they want and deserve. They can tell their story however they like, and if they want to get married dressed as Batman and Robin or in their back garden, they can.”

‘First of all, you’re dealing with love and you’re meeting people at their most loved-up time in their life,” says marriage celebrant Annie Leddy. She qualified last year and, as I’m about to start training to become one too, she’s reassuring me that it’s a great idea. “You can’t say anything other than it sounding corny, but it’s really beautiful. It really and truly is. You’re meeting people at their happiest time.”

I’ve never been one for romance, so I can’t say for certain why I decided to become a marriage celebrant, other than the fact that I love a good party.

However, with modules on the training course such as voice projection, crafting the love story and wedding rituals from all over the world, it’s a lesson in confidence and an education in people, not just a way to secure an invite to the afters.

I’m just one of about 100 people that train with the Irish Institute of Celebrants (IIOC) every year, and whether it’s for a friend’s ceremony, a bit of craic or you’re hoping to branch out on a new career path, celebrancy is on the rise in Ireland.

Since qualifying, Leddy has done five weddings; she has another five in the diary for 2016, and two more for next year. When asked why she thinks it’s so popular now, she points out that there are more options when you use a celebrant and, for many people, that’s exactly what they want.

“There’s a huge, diverse range of people of all ages and genders getting married and wanting to do it their way,” she says. “Maybe they did it the first time round and they didn’t want to do [the same thing] again; [they want] something more personal this time. Having a celebrant like us allows for that because, once you have the legal end of it done, you’re free to do whatever you want for your ceremony, and it’s nice to have that freedom.”

When you use a celebrant, as long as you register with the State and take care of the legal side of things with a solemniser, you can have your ceremony absolutely anywhere, unlike civil ceremonies, which require HSE-approved sites. This means that no two ceremonies are the same.

“We did one last weekend on the streets of Galway – that was great,” says Dr Lorraine Mancey O’Brien, director of the IIOC and a celebrant with Marry Me Ireland.

She lists the Blasket Islands, Howth Head and the Cliffs of Moher as recent wedding locations. She has seen ceremonies that have had no guests but were live-streamed online, and lavish ceremonies where the 250 guests were flown in by helicopter to a private estate. “You’re only limited by your imagination,” she says.

The celebrant gig can bring you anywhere and the ceremony itself can be altered in any way, so even though the odd themed wedding crops up, Mancey O’Brien says that people generally go for the more traditional wedding set-up.

“People ask do we get weird ones; we don’t really. The majority of people want beautiful, elegant, but personal,” she says. “We had a Beetlejuice-themed wedding last year, but that was the only one out of the whole year, out of hundreds of weddings. I’m still waiting for my first Star Trek wedding.”

Now that it’s almost a year since the yes vote was victorious in the marriage equality referendum, and almost 20 years since the first divorce in Ireland, you could say that we’re in the middle of a renaissance when it comes to getting hitched.

In keeping with the changing face of Ireland, Dave Redmond is currently training to become a celebrant, but when he qualifies later this year he will be Ireland’s first drag celebrant.

Redmond often performs at wedding receptions as the glorious drag queen Davina Devine, but he says that the last year has been an absolute whirlwind for members of the LGBTQ community.

“It feels like the dust is just settling down and I’m looking around and you can see how many people have got married since. It’s crazy,” he says. “I was thinking that we’ve come so far and such a long way, and marriage is kind of special and it is wanted for so long by so many, and now we have it. It’s a lot to think about.”

When he signed up for the course initially, he was a bit sceptical about love and marriage, but now that he is almost qualified it means a lot more to him.

“It’s opened my mind and, dare I say it, it’s softened me. There’s no need to be so cynical about love, and it is really about love,” he says, later adding that because he is gay, he just didn’t think that it was for him. “I was never big into marriage, but I suppose a part of me thought, ‘Well, I can’t get married anyway, so it’s not an option’.”

“I want to be able to do it in a serious way and even if I was doing it as Davina Devine, I’m not there to take the piss and go ‘haha, you’re getting married’. It’s not a comedy routine, so it’s interesting to see where it takes me,” he says.

Leddy has noticed that most ceremonies she has seen include “an exchange of vows, an exchange of rings and a kiss at the end ”. The ceremonies can have as many or as few religious elements as requested – depending on the beliefs of the couple and their family – but she finds that people will enjoy the day no matter what.

“At the last wedding I did, I got all excited when some older women came up to me afterwards and said ‘that was really lovely and really beautiful’ and they enjoyed it,” she says.

“For some reason that was unfair of me maybe, I gave myself more credibility from their praise because I felt that they were of an older generation where they may think that this was not marriage or a wedding because there isn’t the church. I was totally wrong.”

The most important thing about the ceremony is that the couple get the day they want and deserve. They can tell their story however they like, and if they want to get married dressed as Batman and Robin or in their back garden, they can.

Even though I won’t be qualified to celebrate until May next year, I already have the wedding of a friend booked in for December 2017 and I fully expect to be a master in love by the time that rolls around. Playing a role in any wedding is exciting, but to be the celebrant is a huge undertaking. But from what I’ve learned so far, it seems to bring out everyone’s romantic side and for someone with a heart of stone like myself, that’s no small feat.