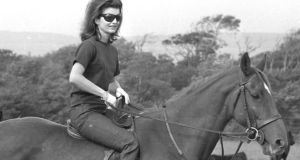 Jackie Kennedy horse riding during a family visit to Ireland in 1967. Her letters to an Irish priest have been tipped to fetch more than €1 million. Photograph: Gordon Standing/The Irish Times

The cache of letters from Jackie Kennedy to Fr Joseph Leonard lay in a safe at All Hallows College in Dublin for more than 50 years after his death in 1964.

The chain of events that led to them becoming public began in February when two staff members of All Hallows College attended a valuation event at the Hibernian Club on Dublin’s St Stephen’s Green that was hosted by Sheppard’s Irish Auction House.

They showed Owen Felix O’Neill, a valuer and expert in rare books, a book from the college library for valuation. It turned out to be a rare medieval Book of Hours from about 1460, which is believed to have belonged to Philip the Good, Duke of Burgundy. Mr O’Neill told them the book was very valuable and they invited him to visit the college so he might assess and value other books and items.

“I have been to the college many times since and was there for almost a week on one visit,” he said yesterday.

He said he immediately realised the value of the letters to Fr Leonard, “and the college desperately needs money”. He alerted Sheppard’s and catalogued the letters, cards and photographs.

The revelation of the letters and some of their contents in The Irish Times yesterday created international media interest, and their contents were reported by all the main US television networks and newspapers including the Washington Post and Boston Globe.

The archive has been consigned to Sheppard’s Irish Auction House in Durrow, Co Laois. Spokesman Philip Sheppard expects the archive will sell on June 10th for “in excess of €1 million”.

All Hallows was opened as a seminary in 1842 by Fr John Hand, a Vincentian priest. It trained as many as 5,000 young men for the foreign missions. In the 1980s it began accepting lay students and is now a college of Dublin City University.

Recycling, reusing and reimagining waste into new clothing and accessories
5

Leftover bread: how to turn it into a great meal
Real news has value SUBSCRIBE