A year after her marriage, she began to write to Fr Leonard in Ireland 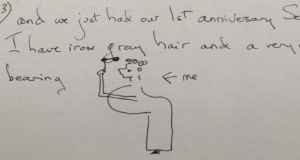 Jackie Kennedy illustrated a letter with a sketch of herself holding a lorgnette: ‘I have iron gray hair and a very imposing bearing.’ 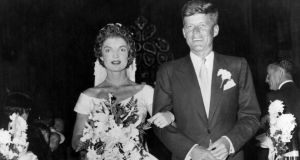 The couple were married on September 12th, 1953 in Newport, Rhode Island.

Among the dozens of handwritten letters in the archive of Fr Joseph Leonard, one of the most interesting was written shortly after Jackie Kennedy and John F Kennedy celebrated their first wedding anniversary. They were married on September 12th, 1953, in St Mary’s Church, Newport, Rhode Island, in a Mass celebrated by archbishop of Boston Richard Cushing.

The couple moved into their first home, a house JFK had bought called Hickory Hill, in Mc Lean, Virginia, close to the home of Jackie’s mother and stepfather.

Imposing bearing
Just one year later, she wrote a light-hearted, happy letter to Fr Leonard and announced: “I am now a matron – you are only a bride a year and we just had our 1st anniversary Sept 12.

“I have iron gray hair and a very imposing bearing.” Jackie illustrated the letter with a sketch of herself holding a lorgnette.

She told Fr Leonard she and JFK had hoped to celebrate their first summer as a married couple visiting Europe together and “going to drive through Ireland” because “Jack wants to go to County Cork & see if he has any relatives there! That is where his family came from.” (Of course, as Ireland and the world discovered in 1963, during his visit to Ireland, JFK’s principal roots were in Co Wexford. )

However, the plan was abandoned because “Congress lasted so long” and Jack “hurt his back and was on crutches”.

She explained: “He’s going to have it operated on this month, as ever since he hurt it in the war it is always going out of joint & putting him on crutches.”

Despite the disappointment, Jackie told Fr Leonard: “After a year, I love being married much more than I did even in the beginning.”

Washington life
In 1955 the couple moved to Washington DC and acquired a townhouse on N Street in Georgetown. Jackie had to get yet another supply of notepaper embossed with the latest address. In a fascinating letter from the house to Fr Leonard in 1956, she wrote about how dull life was in Washington: “I wish some crazy poet would become President as it would make Washington so much more interesting.”

The Republican Dwight D Eisenhower, aged 66 and a former commander of US troops in Europe during the second World War, was in the White House serving a second term as president.