Italian conductor revered for directness and musicality of his performances 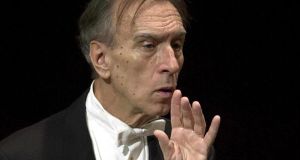 Claudio Abbado, who has died aged 80, was one of the leading contemporary classical conductors, whose refined interpretations of a large symphonic and operatic repertory won him the directorships of several of the world’s most revered musical institutions – including Milan’s La Scala, the London Symphony Orchestra, the Vienna State Opera and the Berlin Philharmonic.

He was known for the directness and musicality of his performances. He was a particularly lyrical interpreter of Mahler, whose richly emotional language he had absorbed as a student in Vienna. But he was also a distinguished conductor of Mozart, Beethoven and Schubert, and he had a flair for Russian symphonic music.

On the opera side his repertory included Mozart and Wagner, but his specialties were Rossini and Verdi, whose music he performed not with showmanship but with respect for the artistry they embody.

Contemporary music was close to his heart too. He promoted the work of Schoenberg, Berg and Webern and championed new works by Nono, Penderecki, Stockhausen, Boulez and others.

He was born in Milan in 1933, to a family that traced its roots in the city to the 13th century. His father, Michelangelo, was a violinist and teacher at the Giuseppe Verdi Conservatory. His mother, a pianist and writer of children’s books was imprisoned during the war for harbouring a Jewish child.

Abbado began his musical studies when he was eight, but he quickly set his sights on the podium. Leonard Bernstein came to Milan in 1949 to conduct a performance in which Michelangelo Abbado was the violin soloist. Bernstein reportedly told the young Claudio he had “a conductor’s eyes”.

While a student at the conservatory in Milan, Abbado spent the summer studying with Friedrich Gulda at the Salzburg Festival in 1955, and with Alceo Galliera and Carlo Zecchi in Siena. There he became friendly with two other music students, Zubin Mehta and Daniel Barenboim, who would go on to distinguished conducting careers of their own.

Mehta persuaded Abbado to join him as a student of Hans Swarowsky in Vienna. In 1958, the two went together to the Berkshire Music Center at Tanglewood, Massachusetts, where Abbado won the Koussevitzky Prize for young conductors.

Back in Italy, he joined the faculty of the Parma Conservatory. In 1960 he made his debut at La Scala in a concert of works by Alessandro Scarlatti to celebrate the composer’s tricentennial. He also won a one-year assistantship to Bernstein at the New York Philharmonic.

A 1965 performance with the RIAS Orchestra in Berlin brought him to the attention of Herbert Von Karajan, who invited him to conduct Mahler at Salzburg that summer and arranged for his Berlin Philharmonic debut in 1966.

Abbado did not actively seek the music directorship of any orchestra. But directorships came his way anyway. In 1980, it was widely reported that the Chicago Symphony had tapped him to succeed Georg Solti in 1982. It did not happen and Sir George remained on the podium for several more years.

In 1989 he was the favoured candidate to direct the New York Philharmonic, and was reported to be looking for an apartment in Manhattan when the Berlin Philharmonic named him to succeed Herbert von Karajan. He held that position until 2002.

In rehearsals, Abbado could be somewhat non-communicative, a quality which derived from shyness rather than arrogance.

Once, after a dinner with the LSO, he was asked if he would like to say anything. He stood up and said: “Thank you all very much” and set down again. According to one orchestra member this was the longest speech he had ever heard Abbado making. If shy, he was not standoffish, however: he played football with his musicians, turning out for the LSO in a match against the London Philharmonic.

Though guarded in interviews he had strong opinions on many subjects, including politics. He was a supporter, but not a member, of the Italian Communist Party. While at La Scala he promoted concerts in factories and schools. Asked to return to Milan in 2008, he agreed, on condition that the city would plant 90,000 trees. It did.

Abbado said he voted for the Communists “because they were the opposition to the fascists. But I disagree with both Italian and Russian communism on many things. My line is very clear. I am for freedom. Everything that is not for freedom I protest.”

Always enthusiastic about working with young musicians, in 1978 he founded the European Community Youth Orchestra and toured with it several times. When some of the orchestra’s musicians passed the upper age limit and decided to form a new orchestra, the Chamber Orchestra of Europe, Abbado signed on as artistic adviser and frequent conductor.

He was indeed a prolific builder of orchestras. He formed the Gustav Mahler Youth Orchestra in 1986, and in 1997 he and former members of that ensemble founded the Mahler Chamber Orchestra, a touring ensemble. In 1992, he co-founded Berlin Encounters, a project that brought together young musicians and experienced players. He founded the Lucerne Festival Orchestra in 2003, with players from the Mahler Chamber Orchestra as its core.

Senator for life
Among his many honours were the Gran Croce, Italy’s highest civilian honour, and the French Légion d’Honneur. He was appointed senator for life by the Italian president, Giorgio Napolitano, last August.

Abbado’s followers were shocked to see the physical change that surgery for stomach cancer in 2000 wrought in him. When he returned to the podium in the following year he seemed to have aged 20 years, the formerly sleek and handsome figure now lean and gaunt.

Two years later, Abbado said of his illness in a television documentary: “I learned some new things; this interruption has been an exceptional experience which has made me see and experience everything in a totally different way.”

Abbado always seemed uncomfortable when summoned back to the stage after a popular performance. Referring to another conductor who refused curtain calls he said: “I used to be somewhat like that. Now I take the time to be polite. Look, I like the reaction of the audience. I’m not sincere if I don’t say that, but it still embarrasses me to take bows. I’m not a showman.”

Abbado is survived by two children of his first marriage to Giovanna Cavazzoni, Daniele and Alessandra; by his second wife, Gabriella Cantalupi, and their son, Sebastiano; by Misha, his son with the violinist Viktoria Mullova; and by his brothers, Marcello and Gabriele, and his sister, Luciana.