‘Is this on the exam?’ The pressing need for philosophy in schools

Broadside: The perception that philosophical questioning is subversive and even dangerous tells us something about the state of education 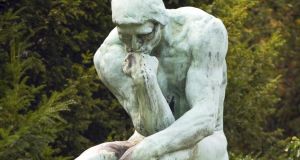 Today more people on the planet own a smartphone than can access a toilet. Among those fortunate enough to be able to do both, two-thirds admit using their phone on the throne. Come rain, shine, or the most challenging bowel movement, there will be Facebook-liking, news-swiping, and fastidious email checking. Wherever there is human life, there is a pocket-sized companion. Darwin’s great chain of being has advanced us to chicken-necked bipeds clasping 3in screens.

App addiction can be antisocial, attention-shrinking and plain annoying among adults, but it takes an even graver toll among children. Staggering findings show that phones are severely atrophying young people’s ability to empathise: children who spend more time online are significantly less able to read other people’s feelings and to identify their own. The upshot is that today’s teenagers choose texting over face-to-face talking. Just as troubling, restlessly stuck to their devices, young people are seldom alone with their thoughts, even though alone time is necessary for self-reflection and creativity.

How do we get young people to trade image-management for deep reflection, swap Snapchat for serious questioning and replace anodyne emoticons with authentic dialogue?

In the classroom, at least, there is one hope for change: philosophy. Philosophy presents the opportunity to take a step back: it inverts the news-in-miniature mindset. This is because philosophy dares students to think big.

What might philosophy in schools look like? Philosophy in the classroom is the restoration of wonder and intense play, and it is for everyone. For a start, it provides the opportunity for children to ask the questions they didn’t think were permissible or even possible, such as: what is the point of an education? Are we all equal? Why, if ever, should we respect authority? Why are these novels set texts? Do the laws of physics lie? What is wrong with hedonism? Even more daring, philosophy implies that teachers and examiners don’t have all the answers, and the right answers – when they are to be had – are not google-able.

Philosophy sounds like a summons to classroom anarchy. Certainly the perception that philosophical questioning is subversive and even dangerous tells us something about the state of education.

With the rhetorical daring of Mrs Merton’s interrogation of Debbie McGee, we might ask, “What is missing from first-world, performance-tabled, grade-branding education?” The answer is: deep thinking. Philosophy develops a suite of skills that are still shockingly neglected by mainstream education. Given the space for deep thinking and deep discussion in class, children are afforded the entitlement to explore, the freedom to be fallible, and the legroom to dissent.

Imagine teenagers emboldened enough to ask questions other than the inveterate plea “Will this be on the exam?”

When pupils are doing philosophy – for example, reflecting on questions such as “Is killing ever justified?” – they are engaged in a game of verbal volleyball. They pass ideas, make tentative suggestions and provide examples and counterexamples for their claims. They learn to articulate answers, to formulate fine criticism and to justify their beliefs.

Unlike other school subjects, philosophy is a metacognitive enterprise: as a matter of course, doing philosophy is about paying attention to how one inquires. In this respect, becoming a philosopher requires socialisation into how to think and how to respond to fellow inquirers; learning to be the coach as well as the player; and to ask, are we being consistent in our argumentation? Did we dismiss opposing views too swiftly? Did we undermine individuals’ contributions for personal reasons?

Philosophy fosters intellectual humility, an ability to disagree without being disagreeable; it instils confidence to ask tricky questions. Perhaps most importantly of all, it teaches children to perceive and to tolerate the spectral grey of ambiguity.

Teaching philosophy requires training, and investment in time and effort. But if we care about teaching kids how to learn, to endow them with the tools for lifelong curiosity, then provision of philosophy cannot be optional.

Uniquely in Ireland, the importance of educational reform – of philosophy in schools – has been acknowledged at the highest level. In 2014, in the wake of the financial crisis, President Michael D Higgins’s Ethics Initiative called for national debate about what we value as a society. The President has repeatedly argued that if we cherish democracy, we need an active and independent-thinking citizenry, and that philosophy in schools is the means to that end.

Philosophy can be an antidote to groupthink, whereby a cloying consensus can choke off free thought.

Consider the groupthink of the Celtic Tiger years, when no one stood back, reflected and pointed out the dangers that lay ahead in overborrowing from the banks and overheating the housing market. Few were prepared to be the little boy in the street pointing out that the emperor has no clothes. Philosophy emboldens us to challenge groupthink.

In this year of celebrating independence, let’s mark it with a genuine monument, and liberate our young Instagrammers, tweeters, and Facebook friends from cyberspace. Let’s give them the mental apps to navigate the world of ideas. After all, philosophy is the only GPS that zeroes in on complex beliefs, gives scope to our value systems and readily admits when it is lost.

Paul Flynn: A wonderfully easy and logical way to feed your family
7