Is it possible to cycle safely and legally in Dublin?

Video: Conor Pope takes to the streets to see how well cyclists obey the lights and law

Conor Pope took to the cycle lanes of Dublin to see how obedient the city cyclists are and what, if any, difference the new regulations will mean to them? Conor Pope reports. 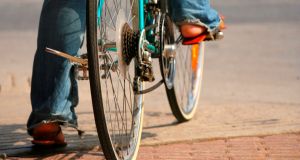 Of all the rule breakers we witnessed, the cyclists are the ones least likely to actually harm their fellow road users

Two, 17 and 12. That’s the number of times, respectively, this writer and his brave – and maybe kind of foolish – cycling cameraman were nearly killed by buses, saw cyclists display a wanton disregard for the rule of law and watched cars come close to clipping people who came close to them over the course of a 45 minute two-wheel jaunt in Dublin city centre last week.

Of all the rule breakers we witnessed, the cyclists are the ones least likely to actually harm their fellow road users. The cohort of anti-cycling commentators may beg to differ, but it is a fact: cyclists mounting pavements or breaking red lights may well be annoying, but they are rarely lethal.

Buses, on the other hand.

Despite their relatively benign presence – even when they are flouting the law – cyclists are the ones under the glare of the media spotlight right now and the opprobrium is going to get worse over the next couple of months when cyclists will not only take their lives in their hands when they mount their trusty steeds for their morning and evening commute, they will also face penalties of up to €2,000 under a system of fines rolled out by Minister for Transport Paschal Donohoe.

First there will be a G7 of new cycling offences that will attract €40 fines. They kick in from the beginning of next month, after which any cyclists that gardaí see breaking red traffic or cycle lights, cycling in a pedestrianised area, failing to stop for a school traffic warden sign or at a level crossing, cycling without lights after lighting-up times and “driving a pedal cycle without reasonable consideration” will be fined €40.

Miscreants will then have 26 days to pay, after which the fine will automatically jump to €60 where it stays for another 56 days. Then the wheels of justice will start spinning faster and courtrooms – and €2,000 penalties – will appear on the horizon. There could be a lot of very fined cyclists complaining by Christmas if our experience last week is anything to go by.

We saw a lot of laws broken, the most common offence being the red-light jump.

Now a red-light jump sounds kind of seedy but is actually quite innocent.

A cyclist stops at a red light, as they are supposed to. They do this largely because to do otherwise would see them mushed by cross-town traffic. They wait patiently as pedestrians cross in front of them and then, when they know the lights are on the turn, and when they can see that no traffic will mow them down, they make a dash for it.

The lights and the law are broken, but no harm is done to anyone.

There is a second type of light breaker. These approach all pedestrian crossings like Chris Froome at the end of a sprint stage of the Tour de France. They plough through the crossings, gesticulating wildly at distraught pedestrians and swearing at oncoming traffic.

They are nuts. And they give the more gentle lawbreakers a bad name.

We also came across at least five cyclists weaving through pedestrians on footpaths. In two cases, the cyclists had jumped the kerb to avoid cars – taxis, as it happens – which were far, far too close to them, and on the other occasions they were doing so to get from A to B just that little bit faster.

At a red light on O’Connell Street, we spoke to Constantine Vascu from Romania, who admitted that he “sometimes” broke them but said the new rules would probably lead to him being more disciplined.

At another set of lights we met Aileen Rogers from Dublin. She cycles every day and when we asked her if she always obeyed the rules of the road she said “it depends”.

On what? “Well, I go through a red light if I know it’s going green.” She’s been knocked down by cars more than once and has lost all feeling in one hip as a result. She didn’t know about the new penalties but said they would change her habits and stressed that she was “pretty good on the road” as it is.

Not as good, maybe, as Kelly Birmingham who is a model cyclist. She always obeys lights, wears a helmet and high-vis jacket and has an acute sense of her own mortality. “I nearly got creamed yesterday by a truck,” she says, adding that it is “about time” the new rules are brought in.

We would like to have spoken to some of the lawbreakers too but it wasn’t to be. The only way we could catch up with them by breaking the law ourselves and that is something we’d never do.