The French are entertained by the antics of President François Hollande, but will his new lover, Julie Gayet, become first lady, and will Valérie Trierweiler, his spurned former mistress, seek retribution? 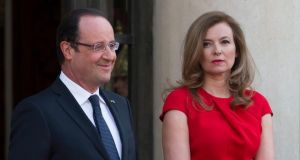 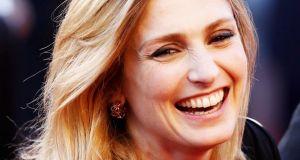 It wasn’t supposed to happen under a Hollande presidency. When Nicolas Sarkozy made photographers the eager witnesses of his love affair with Carla Bruni, François Hollande criticised “this show-off president who makes voyeurs of us all”.

Yet France has again became a nation of voyeurs, since Closer magazine published its seven-page dossier on Hollande’s “secret love” on January 10th. What the French refer to disparagingly as la presse pipol has boosted sales of mainstream magazines, all of which lead this week with the love triangle between the 59-year-old president, his 48-year-old mistress of nine years, Valérie Trierweiler, and the 41-year-old they’re calling France’s “second lady”, Julie Gayet.

The story seems to confirm the stereotype of French infidelity. But is it infidelity when Hollande has never married, and both women were long separated from their husbands? Is it even particularly French, when one considers the escapades of, for example, John F Kennedy and Bill Clinton? What could be more “normal” than for a frumpy, ageing politician to succumb to the charm of a younger, adoring woman?

That said, there are profound differences of attitude between the French and les anglo-saxons towards desire, sex and marriage. In her 2012 book How the French Invented Love, the US academic Marilyn Yalom cites a poll on whether marriage can succeed without vibrant sex. Only 34 per cent of French respondents said yes, compared with 84 per cent of Americans. “A Frenchman or woman without desire is considered defective, like someone missing the sense of taste or smell,” Yalom writes.

The French invented courtly love in the 12th century, as an upper-class pastime that emphasised physical pleasure and recognised women’s desire and emotions. Marriage was not part of the picture. In subsequent centuries the French found that maintaining marriage through extramarital affairs allowed them to preserve wealth and social ties.

Yet for all the pretence of sophistication and open-mindedness, infidelity still hurts. In his press conference at the Élyssée Palace in Paris on Tuesday, Hollande referred to “painful moments” in his personal life. He broke the news to Trierweiler himself, acknowledging the truth of rumours that had been circulating for the past year about his affair with Gayet.

Not since Napoleon told Josephine he was divorcing her for the Austrian emperor’s daughter has a first lady taken the news so badly. Trierweiler is still in hospital at Pitié-Salpêtrière – not Val-de-Grâce, where presidents are cared for – reportedly in “a state of extreme nervous fatigue”.

Hollande delivered the news coldly, and pressed Trierweiler to sign a joint statement saying their relationship was over, according to the Nouvel Observateur magazine. Though she and Hollande were no longer lovers, Trierweiler believed they had a deal that she would continue as first lady. Instead, she finds herself deceived and humiliated, like Ségolène Royal before her.

Royal spent more than a quarter of a century with Hollande and had four children with him. The two women fought over Hollande for two years after Trierweiler became his mistress, in 2005. Trierweiler was so jealous that she later asked Hollande’s campaign manager to erase all trace of Royal from Socialist Party videos, and prevented Royal attending the funeral of Hollande’s mother.

After Trierweiler tweeted urging socialists to vote against Royal in 2012, Thomas Hollande, the couple’s eldest son, said he and his siblings wanted nothing to do with the new mistress.

Trierweiler’s origins may help to explain her insecurity. Her disabled father could not work. Her mother was a cashier at a skating rink, and the family lived in public housing in Angers, in western France. In his book La Favorite the former Le Monde editor Laurent Greilsamer described Trierweiler as “unconventional, imperial, amorous, explosive, unpredictable. And clearly dangerous.”

Trierweiler alienated journalists and Hollande’s staff during his presidential campaign by being overly controlling. She put the candidate on a strict diet and persuaded him to dye his hair. Herself a journalist at Paris Match, she held reporters at a distance.

As first lady Trierweiler continued writing a column on art and literature. The first line of her last column, about a book on a forgotten Resistance hero, reads: “There is no more mortal poison than indifference.” She and Hollande appear on the cover of the same magazine, with the headline, “A couple tested by power: The first lady in torment.”

French media are siding with Gayet. In its cover story on “Julie Gayet: A French Passion”, Elle magazine portrays the actor as a potential first lady. “In the president’s entourage, some hoped from the beginning . . . that he would break up with this journalist too tangled up in contradictions to weave real ties with the French,” the magazine says.

Gayet seems the opposite of Trierweiler: a good-natured, gentle, socialist groupie who, like Hollande, is from an upper-middle-class family. Gayet’s father is a prominent surgeon, her mother an antique dealer who is helping to raise the two sons Gayet has with the writer Santiago Amigorena.

Gayet’s arty films are rarely commercial successes. She has organised cultural events and founded several production companies, including one called Rouge International. “Red like angry,” she said. “But also like lipstick. After all, we’re girls . . .”

The satirical newspaper Le Canard Enchâiné revealed this week that Gayet had been nominated to serve on the jury of the Villa Médicis, a sumptuous government-owned retreat for French writers and artists in Rome. The budget minister slipped and referred to Gayet as Hollande’s “companion” when asked about the nomination. The minister of culture issued a communique saying, “Given her experience as an actor and producer, Julie Gayet is perfectly qualified for this function, which is unpaid. But in view of the particular situation, I will not appoint her.”

François Hollande has twice continued publicly as half of a fictional couple – first with Royal, then with Trierweiler – when he had in fact moved on. François Mitterrand, Jacques Chirac and, initially, Nicolas Sarkozy also posed for photographs and travelled with women who were wives in name only.

A new book about Hollande by the journalist Cécile Amar, Up to Here It’s All Going Badly, portrays the president as a man obsessed with his own freedom. Before he was elected Hollande asked his security detail: “What will happen if I ride a motorcycle?” On arrival at the Élysée he asked an aide: “How can I go out without being seen?”

The suspense continues. Hollande has promised to clarify Trierweiler’s status before his February 11th trip to Washington, where she was supposed to have accompanied him. Nadia Le Brun, coauthor of a book on Trierweiler, thinks she might forgive him for the “public humiliation”, as Hillary Clinton forgave Bill.

But if Hollande rejects her, Le Brun warns, “As soon as she’s better, Valérie Trierweiler will answer blow for blow.”

A statement announcing the end of the relationship appears the most likely scenario. The president is then expected to slowly bring Gayet into the public eye. There are rumours that she is pregnant, and speculation that Hollande, who is not the marrying type, could make Gayet his first wife and second first lady. Being “first girlfriend” proved awkward and painful for Trierweiler, an experience Hollande might want to spare Gayet. And marriage to her might alter Hollande’s image as a man who never commits and can’t make up his mind.