In praise of men

How to be Man: Anthea McTeirnan counts the ways why we love men 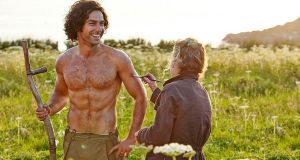 A hunk by any other name: Aidan Turner as Poldark. Photograph: BBC

How to be a Man is a series exploring masculinity and the challenges facing men in Ireland today. If you would like to add your voice to this series, email howtobeaman@irishtimes.com

“What a piece of work is a man! How noble in reason! How infinite in faculties! In form and moving, how express and admirable! In action, how like an angel! In apprehension, how like a God.” William Shakespeare put these words in Hamlet’s mouth, but he was definitely on to something.

Anyone seeking instructions about “how to be a man” from The Irish Times series of the same name may be disappointed. There is no go-to guide. Prospective gods and angels may be enjoying new-found freedoms to be whoever they wish to be, though. As part of the How to be a Man series, Fintan O’Toole thanked feminism for this fluidity, so we’ll take that one for the team.

Being a man seems harder to pin down than ever. So, you’ve guessed it, we’re not even going to try. Instead, we will simply say that if you disregard the ways men can break bad, men are actually awesome.

What a legacy. What a future. What’s not to like? Let us count the ways...

Balls: You get know what to do with them

Where would we be without balls? Football, rugby, soccer. Whatever you’re having yourself. Show us a playing field anywhere in the world that is not stocked with gods and angels of all ages and all sizes and we’ll show you a person who is losing touch with the vibrant joy of life. Mesut Özil’s goal against Chelsea last weekend even gave us non-Arsenal fans a bit of a flutter. If Özil’s strike didn’t put your feminine side in touch with your adoration for the masculine side, it was never meant to be.

Men have had the courage to fight and die for the causes they believe in. See? They have balls. Literally and metaphorically.

This year, we are remembering the centenary of the Ireland’sEaster Rising. Women who were involved in the fight for Irish freedom are also being remembered, which is right, yet the men who gave their lives still loom largest because they took the heaviest hit.

Men have been picking up weapons and fighting tyranny and oppression for millennia. And they continue to do so. The fight over what is a “just war” and which class of men actually started the battle in the first place, continues to rage. Yet, more often and more numerously it is men who must screw their courage to the sticking post and fire the bullets before any discussion is even had.

In the eye of the beholder

Enough beating around the bush. There is no escaping the fact that men are beautiful.

The world may fawn over female beauty to keep the sexual status quo, but, like Beyonce, Cara and Gigi, Beckham, Poldark and Barack need no other names. Put them in a sarong, hand them a scythe or make them give a State of the Nation address, they will always deliver. Without coming over all Germaine Greer, there is something beautiful about the cut of men’s jib. Thank you.

Bins: the love that dare not speak its name

There may be comfort in conforming to allotted gender stereotypes but men are no better or worse at doing domestic tasks. In my abode, the man does all the washing and drying of garments, the woman does the toilets and the cleaning. The gender of the task master or mistress is irrelevant. Aptitude is what counts and once each person’s ability to keep the whites white turned out to have nothing to do with their genitals, it was a no-brainer.

As for the bins. The struggle continues, but to quote Shakespeare: “in form and moving, how express and admirable!” you men are. I have yet to see a woman on the dustbin run. There may be some jobs, such as rat-catching, women will have to take on, until then, as you were gents.

Bread: Putting it on the table

“A man provides. And he does it even when he’s not appreciated, or respected, or even loved. He simply bears up and he does it. Because he’s a man.”

A quote like this, from Gus Fring, head of one of the country’s largest methamphetamine production/distribution operations in the US, is a good reason to love Breaking Bad.

It is also the ultimate reason to love men.

Men may collect the straws that break their own backs, but they do so with a lot of love and duty. Men try their best to provide for the people they love even when the task is nigh on impossible and it breaks them or their spirit. It makes men vulnerable to systems they may not have had a hand in, but, as Fring said, “he simply bears up and he does it” because, in the end, meth will meet its maker.

Two years before he became the 26th president of the US, Theodore Roosevelt said: “We do not admire the man of timid peace. We admire the man who embodies victorious effort; the man who never wrongs his neighbour, who is prompt to help a friend, but who has those virile qualities necessary to win in the stern strife of actual life.”

It’s not a lot to ask, surely?

PS:. Did we tell you that we love you?