‘I wanted to find a way to create an awareness that the children live here, too’

Instead of chasing the local children out of her gallery, Oonagh Young started listening to them. The result is ‘Buzz’, a new comic book and exhibition 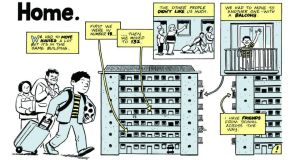 Growing pains: one of the stories from Buzz

Beloved and angelic or nothing but trouble? How you see children depends on your relationship to them. But when Oonagh Young, a graphic designer, remortgaged her home to buy somewhere to open a gallery in Dublin’s north inner city she quickly found herself becoming just another of the local business owners, shooing tribes of kids out of her space.

As time went on, and she realised that the only locals to come into the gallery were the children, she started to see things differently. “People come to work: they drive, arrive, park their cars, go to their offices, and then they leave; they see the kids as a nuisance. I wanted to find a way to create an awareness that the children live here, too,” she says.

The Oonagh Young Gallery is on James Joyce Street, down the road from Connolly Station. The Lab and Flood galleries are nearby, as is the headquarters of Dance Ireland. New buildings have sprung up, but recession and deprivation have made an indelible mark, and the area is obviously waiting for the magic hand of renewal to pick it up, shake it out and give it another, better start.

For Young this begins with the people who live and work there. “There’s this idea of the inner city. People have [negative] expectations, but my experience has been 98 per cent positive. I started to let the kids into the gallery, one by one. I get them to sign their names in the visitors’ book, so now I know them.”

Instead of kicking them out she started listening to them. The results of this, supported by a Neighbourhood grant from Dublin City Council, is Buzz, a comic book and exhibition. The artwork is by the illustrators Philip Barrett and Fintan Taite, but the stories and words are directly from the children themselves. “I wanted to bring them back to being individuals, with lives, hopes and fears.”

Buzz is based on the comics Young grew up with: the Dandy , the Beano and Whizzer and Chips. “That’s my era, but it’s also the era of those in managerial positions in the offices around here,” Young says.

To help change their outlook she wanted it to feel familiar to them. The stories came, with the help of a counsellor and play therapist, Damien McKenna, from fourth class at Central Model Senior School, on Gardiner Street, and from the children who come into Young’s gallery. Their own drawings will also be exhibited, alongside original artwork from Buzz.

The stories range from tales of immigration and lives left behind, and problems with pets, parents and siblings, to hobbies, fascinations and moving house, as well as all the other adventures, large and small, that occupy the minds of growing children.

It’s a project that brilliantly brings home the fact that social inclusion isn’t about teaching everyone how to be middle class, any more than multiculturalism is about everyone becoming the same.

Young’s enthusiasm and energy are infectious, as is her dedication. She balances graphic design, including work for the RHA and the Irish Museum of Modern Art, with putting on exhibitions. “I try to keep both going. It makes it more exciting. I had thought the gallery would take over, but opening in 2008 . . .” She shrugs expressively at the “difficult” timing, but she also embodies the DIY spirit, of not giving up but instead making things happen. “I’m trying to make a space that I’d like to come into and be curious about,” she says.

And Buzz is dedicated to making that an open invitation, and a conversation for the whole neighbourhood to be a part of.

Buzz launches at the Oonagh Young Gallery on Wednesday at 11am; the show runs until next weekend; oonaghyoung.com

Self-compassion important in the age of Covid-19
10