‘I feel as though I’m not doing anything well,’ she said. Many of us can relate

Laura Kennedy: no person can be healthy and dispense more energy than they possess forever 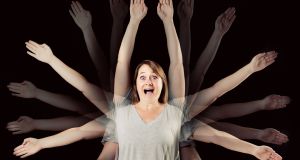 Human beings are not specialists, but generalists

Recently, over a cup of tea, a woman I don’t know very well told me something that I haven’t been able to forget. She has a well-paid influential job that a lot of people would be envious of. She has a husband who is kind to her, and whom she loves. She has little children who have the power to illuminate her from the inside, and frustrate her beyond rational capacity, but mostly the former. Staring sadly into her tea, she shed that invisible layer that people who don’t have a very close relationship almost always wear in one another’s company, and she told me the truth.

The truth is a rare gift, and ought to be gratefully received when encountered. She told me, this woman whose life so many would envy, that she felt she was only giving about 70 per cent of her ability to every area of her life. She was stretched across all these demands. They outweighed the resources she had to meet them, and she was living with a prevailing sense of failure that gnawed at her and left a heavy weight in her stomach. She wasn’t as good a mother as she might be, or as attentive a wife. She had to leave the office early more than she would care to admit because of tumbles at school, or the hospital appointments of elderly parents. On the way to and from those appointments, the same elderly parents would admonish her for not thinking to pick up milk for them, and for not visiting often enough.

“I feel as though I’m not doing anything well,” she said, the pitch of her voice revealing a desperation it was clear she rarely spoke aloud. This interaction was illuminating. It was obvious that she needed to express these trapped fears and frustrations, and that she didn’t expect me to have answers to her dilemmas, so I simply listened. After a time, she appeared to be finished. She looked tired, and a little relieved. Our tea consumed, we went our separate ways.

On the stroll home, my mind inclined, as mind’s selfishly will, toward my own situation. Though individual circumstances differ, and no person can be healthy and dispense more energy than they possess forever, we have all felt like my tea companion at points during our lives. I had, in fact, been feeling rather sorry for myself prior to our tea. I don’t have children, but have lived through loss, parental illness and death, poverty, unemployment and working multiple jobs at once. My life is now objectively better than it has ever been, and yet still I can find it within myself to feel overstretched, or beleaguered, or simply tired of sacrificing quality of life in the present for theoretical benefits in the long run.

As usual, in a combination of the arrogance and lack of self-esteem or self-reflection that characterises our species, we expect from ourselves that of which we are not capable. We expect consistent output as though we are machines. We are not machines. We are far less efficient than machines, for one thing, and we are far more complex and interesting. A machine that is designed to separate the unripe tomatoes from the ripe ones (you can google it, it’s quite mesmerising) is almost unbelievably efficient, because it was designed specifically for that purpose. A machine designed to do this job while simultaneously dusting and mopping floors would be far less so.

My companion was chiding herself because she could not perform functions as disparate as these with complete efficiency. It is hardly any wonder that she couldn’t. If we could, like a machine, focus on one task, we might be able to execute that task with all of our focus and energy, but we would be rather less human. Human beings are not specialists, but generalists. We have the capacity to separate unripe tomatoes from ripe ones, love our children, be a spouse, work a job. It is arrogant and unkind to expect ourselves to be able to do all of those things as though the demands of the other do not call our focus away at times. It is a pity, I thought while walking, that it took sympathising with another person for me to apply this understanding to myself.