I envy Marty Whelan. His voice bouncing into bedrooms in Cahersiveen and Killarney

Michael Harding: The first time I ever made love, a radio was playing Bob Dylan’s ‘Forever Young’ 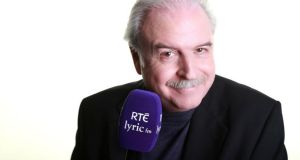 'Marty is no exorcist. He’s more like everybodys’ best friend.'

I was in RTÉ recently to do an interview with Marty Whelan. I arrived at 8am and it was still dark outside, although there were diggers rumbling into action and men in yellow jackets and hard white hats directing incoming cars. Tar machines and steam rollers were laying a new pathway outside the Radio Centre.

“There’s big changes going on outside,” I said to Marty.

“There’s big changes going on inside as well,” Marty joked.

But I suppose a radio station never remains the same. RTÉ used to be as exclusive as the seminary in Maynooth, surrounded by high walls and tall trees. And people inside spoke in hushed voices and lights glowed like red sanctuary lamps above the doors of various studios to indicate that a presenter was On Air. In those days presenters were almost shamanic in their ability to conjure up the demons of the nation and to exorcise them. But it’s all changed now. There are too many stations for RTÉ to maintain any sense of exclusivity.

Lyric FM is based in Limerick, but Marty Whelan broadcasts from the Radio Centre in Donnybrook. It must be lonely for him, passing by all the people in the Radio Centre who work with RTÉ One and Two, as he slips alone into the empty LyricFM studio, turning on the lights and adjusting the microphone and then waiting in solitary confinement for the “On Air” sign that connects him to the ears of the nation.

But I envy him. His voice travelling across the countryside, wakening people from dreamland, calling them to a new day. His voice travelling over the Sugarloaf mountain, and sweeping down across Tipperary and Cork and bouncing into little bedrooms in Caherciveen and Kilarney; not to mention Connemara and the windswept hills of Donegal. His gentle voice whispering on the nation’s pillow five mornings a week.

Marty is no exorcist. He’s more like everybodys’ best friend.

I was in Mullingar a few hours after the interview and a man said to me, “I heard you with Marty this morning. I was feeding nuts to the horses and I had the radio on in the stable yard.”

“Radio has a powerful reach,” I replied.

I have experienced enough depression myself to know what he meant. A pleasant radio voice can be a powerful balm for people who open their eyes to one day of melancholy after another.

In the old days I used to visit a man on the edge of the mountain near Glan Gap.

Because in those days the wireless was only turned on at one o’clock for the news. It was rarely on in the mornings, when people were getting out of bed. People woke to the sound of crows in the chimney and magpies in the spruce trees outside, rather than the mellifluous tones of someone as engaging as Marty Whelan.

When I was at University the radio served as a blanket for intimacy. Love making was such a guilty and intense pleasure that a loud radio was useful as a sound barrier.

The first time I ever made love was in a small hotel in Mayo. The radio wasn’t on, but below the bedroom someone was playing a record of Bob Dylan, and as far as I remember my joy became complete during the chorus of Forever Young. It made me feel invincible.

And I thought music might work on further occasions. So not long afterwards, in a squalid flat in Maynooth, and with the same partner, I jumped out of bed one morning and turned on a tape of Johann Sebastian Bach.

But there’s something so religiously baroque about Bach’s music that on the first flourish of trumpets I feared a thousand fully frocked bishops might burst forth from the wardrobe singing Alleluia. And my partner was so put off by the music that she pushed me away, and said, “That sounds like someone being deflowered by a college of cardinals.”

Now that I am older, love making is not so much a discovery as a ritual of remembrance and gratitude for a life shared. The lusty hunger that once blinded me to everything when I was young doesn’t interfere anymore with the art of the true embrace. When I am with the beloved we lie in grateful silence. And when she is away, and I am alone, I reach out to the power button and turn on the soothing voice of Marty in the Morning on Lyric FM.