I believe in yesterday: the power of nostalgia

Watching Boyhood in the cinema, a visceral nostalgia for the not-too-distant past hit me hard 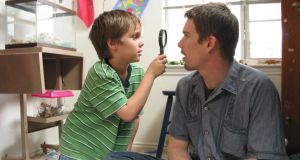 As the closing credits for Richard Linklater’s Boyhood rolled, I remained motionless in my seat, elated but also filled with yearning and a sense of loss. I felt crushed by nostalgia.

I tried to talk myself out of it. I considered myself too young to be pining for the good old days. Besides, the film’s era felt too recent to be mourned: Boyhood follows the life of its protagonist from 2000 to 2012, as he grows from age six to 18.

I wasn’t sure what it was about Boyhood that had me in such an existential tizzy. Perhaps it was its indie soundtrack, which perfectly encapsulated the last decade for me. Maybe it was the film’s depiction of shared cultural moments that are – no matter how recent – gone forever.

Until JK Rowling decides to write a prequel, there will never be another Harry Potter midnight launch party. And it might be decades before a politician inspires the kind of optimism and excitement that Barack Obama did in 2008.

Our culture trades on nostalgia, if not often with the same sincerity and emotional power that Boyhood does. You can’t look at your Facebook these days without coming across links to articles such as “Things only ’90s kids remember” or “Ten songs that rocked summer 2002”.

Millennials flock to see reboots of movie franchises: Tobey Maguire’s Spider-Man had barely slunk off our screens when Andrew Garfield’s came swooping in.

The Lego Movie, notionally a kids’ film, preys magnificently on the nostalgia of parents bringing their little ones to the cinema, conjuring up memories of happy childhood afternoons lost to plastic bricks.

And the sitcom How I Met Your Mother manages to suffuse even contemporary culture in nostalgia, by the use of an ingenious framing device: a father in 2030 recounting his glory days to his children.

The nostalgia industry is booming, but what use is it? The prevailing wisdom is that we should all be living in the moment, looking to the future and letting go of the past – all of which sounds peppy and upbeat. The word “nostalgia”, on the other hand, sounds ominous: it comes from the Greek words nostos, meaning homecoming, and algos, meaning pain. Historically, it was considered a mental disorder, and while that’s no longer the case, we still associate nostalgia with remembering something as being better than it was. So why is it so irresistible?

Ian Robertson, professor of psychology at Trinity College and the author of The Winner Effect, says it is a way of coping with present troubles; distress triggers nostalgia rather than the other way around.

“Nostalgia is a sentimental longing or wistful affection for a period in the past, which implies that there is some deficit in the present against which the past is being favourably compared.”

Nostalgia is not the sole preserve of old fogeys, he says. “Very young children who do not yet have a fully developed sense of self probably can’t experience nostalgia, but in principle it’s possible at any age.”

Nostalgia, however, is also more than a coping strategy. “There is one theory, with some empirical support, that nostalgia helps reinforce a sense of meaning in life by fostering a connectedness with the past,” says Robertson.

Recent studies at the University of Southampton found that nostalgia increases self-esteem and strengthens social bonds.

“Most of our days are filled with routine activities that aren’t particularly significant: shopping for groceries, commuting to work and so forth,” psychologist Clay Routledge told the BBC. “Nostalgia is a way for us to tap into the past experiences that we have that are quite meaningful, to remind us that our lives are worthwhile, that we are people of value, that we have good relationships, that life has some sense of purpose or meaning.”

Perhaps, at heart, we are nostalgic creatures. Many adults, including myself, still religiously watch the Late Late Toy Show, usually sighing that Tubs doesn’t rock the novelty jumper with the same panache as Gaybo. The more fashionable of us scour charity shops for vintage clothes. Hipsters sport throwback facial hair. You only have to say “Bebo”, “Napster” or “Sega Mega Drive” to many twenty- or thirtysomethings to make them go misty-eyed.

Beyond these superficial examples, there’s something of real value: nostalgia gives us a sense of narrative in our lives. We all need past triumphs to draw upon, to be reminded of our roots. Nostalgia, it turns out, can be good for you.