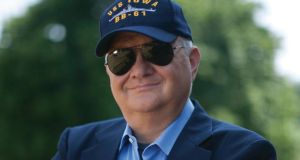 Tom Clancy at his home in Huntingtown, Maryland

Tom Clancy, who has died aged 66, dominated the bestseller lists of the 1980s with a series of novels that thrust his CIA analyst hero Jack Ryan into situations that combined the intricacies of cold-war politics with precise details of modern military operations and equipment.

With the end of the cold war, Clancy adapted seamlessly to the new era of terrorism, with no decline in sales; only JK Rowling and John Grisham joined him in meriting first printings of more than two million copies.

Seventeen of his books topped the New York Times bestseller list, and his income as a novelist may have been matched only by that of Stephen King. He was also one of the first writers to recreate himself as a brand name, helped by the astute use of video games. His company Red Storm produced a string of games, often based on novels that bore his name as co-writer but were not written by him.

He also became a spokesman for right-wing political causes and a frequently-quoted pundit on terrorism, especially after the 9/11 attacks replicated aspects of his 1994 novel Debt of Honour. In that story Ryan becomes US president after a Japanese terrorist crashes an aircraft into the Capitol building during the president’s state of the union address.

Non-fiction
Clancy took this role seriously, producing 11 non-fiction books on military hardware and command. The best-known of these was Battle Ready (2004), a collaboration with marine general Anthony Zinni, like Clancy a critic of the Bush administration’s policy on Iraq.

Clancy took his prophetic reputation lightly, once saying: “Osama bin Laden has never sent me any fan mail, and I haven’t really sold that many books in Afghanistan . . . But no, if I could predict the future, I’d be down on Wall Street.”

The springboard for Clancy’s success was his first novel, The Hunt for Red October (1984), in which Ryan, then a lowly analyst, realises a rogue Soviet submarine captain is trying to defect. The cat-and-mouse game between Ryan and Capt Ramius is mirrored by each man’s battles with his own side, creating a thriller framed by intimate knowledge of submarine technology.

It was largely that technological awareness that allowed the book to find a publisher, the obscure Naval Institute Press, but New York publishing legend Robert Gottlieb read it in proof, and as word of mouth and a plug from then president Ronald Reagan sparked sales, it entered the mainstream. The novel became a 1990 hit film, with Alec Baldwin as Ryan and Sean Connery as the Soviet submarine captain.

Ryan was played in subsequent hit adaptations of Clancy’s novels by Harrison Ford and Ben Affleck.

Clancy was born in Baltimore, Maryland, and attended Loyola high school where, he said later, he was a “nerdy but totally normal kid”. He moved on to Loyola University, graduating after switching from physics to English. He worked as an insurance agent, writing in his spare time.

Red October made him a millionaire. He resuscitated the Ryan character for Patriot Games (1987) and Cardinal of the Kremlin (1988), teaming Ryan with John Clark, who became a recurring character, in Clear and Present Danger (1989), the bestselling hardback book of the 1980s in the US.

Film adaptations
Ford played Ryan in the film versions of Patriot Games and Clear and Present Danger, but Clancy was unhappy with his characterisation. In the 2002 adaptation of Sum of All Fears (1991), Affleck took on the role. A new film, Jack Ryan: Shadow One, starring Chris Pine as Ryan and directed by Kenneth Branagh, is due for release later this year.

Between 1984 and 2003, Clancy wrote 13 novels with Ryan and/or Clark. One of these, Rainbow Six (1998), was published to coincide with the release of his highly successful video game of the same name.

In 2003 the series appeared to end with The Teeth of the Tiger, which introduced Jack Ryan jnr and two of his cousins as protagonists. But those stories resumed in 2010 with four more novels, all written by collaborators; the last, Threat Vector (2012), opened at No 1 on the bestseller lists.

Clancy’s Op-Center series of novels became a bone of contention between him and his first wife, Wanda Thomas King, whom he divorced in 1999 after 28 years of marriage. As part of the settlement, she had received part of his share in the series, but she sued Clancy, claiming he deliberately stopped promoting it.

Clancy married Alexandra Llewellyn in 1999, the couple having been introduced by former US secretary of state Colin Powell. She survives him, along with their daughter, and a son and three daughters by his first wife.