How Ross O’Carroll-Kelly was born

From his double-barrelled surname to his school, the greatest player never to play for Ireland was conceived one winter’s afternoon in the offices of the now-defunct ‘Sunday Tribune’ 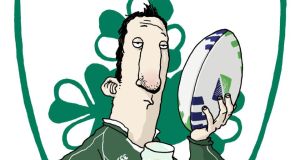 Ross O’Carroll-Kelly: Paul Howard was collared by one UCD student who was convinced the column was written by Brian O’Driscoll. Illustration: Alan Clarke 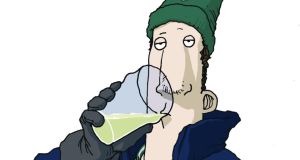 You would need to be very long in the tooth to remember Zhivago, but the middle of its dance floor is where Ross O’Carroll-Kelly was conceived. For the sake of decency, let me assure you it was no longer a nightclub when this occurred. Nowadays 15 Lower Baggot Street, in the middle of Dublin, is a sweaty gym, but between 1989 and 2009 it was home to the Sunday Tribune newspaper.

There, one winter’s afternoon in 1998, a conception took place in which I played a vital role. My colleague Paul Howard took the pregnancy to full term, delivering a joyful bouncing boy who would entertain several generations of readers and sell more than a million books and many more newspapers.

That pregnancy metaphor may be a little awkward, but, even in pre-marriage-equality Ireland, we did things differently at the Tribune.

It was an often thrilling place to work. The paper had a series of editors, including Vincent Browne, who were mostly happy to allow journalists a degree of freedom that was unknown elsewhere. A young staff made a lot of mistakes but also scaled the heights more often than their competitors.

This was especially true on the sports pages, where I steered the ship for five years in the early 1990s. Even when I moved elsewhere in the paper I volunteered to help in their production, because I couldn’t bear to be taken away from a crew that made me laugh every single day. And chief among them was Paul, a particularly talented sportswriter.

I had come across him some years before, when he turned up for his first shift in what appeared to be his confirmation suit. Browne was the only other person at the paper who owned a suit, and this seemed unnecessarily thrusting behaviour on the part of the youth.

Nicknames were an important part of the culture, and Paul’s huge glasses ensured that he was known as Joe 90, after the 1960s TV character. But he quickly outgrew that.

By the late 1990s much of the Tribune’s sports coverage was built around him, and he revelled in the opportunity. While other sportswriters followed the calendar and faithfully covered events as they turned up every year or four, Paul hungered to go deeper.

After the Michelle Smith controversy broke, Paul travelled to North America and Europe to talk to the three women Smith had beaten into silver-medal positions at the Atlanta Olympics. He sought interesting stories wherever he went, getting the first interview with Daniel Timofte, the Romanian whose penalty miss put Ireland into the Italia ’90 quarter-final.

Having several pages to fill every week wasn’t enough for Paul. After an abusive letter complaining about League of Ireland coverage, he responded by setting up a branch of the Cwmbrân Town supporters’ club and a League of Wales fanzine. This “Branzine” lasted years, and reporting that was initially straight turned into the type of comic writing that spawned Ross.

One of Paul’s Tribune columns was called the Mixed Zone, a pot-pourri of gossip, gags and quirky stories. In early 1998 he revealed that he had a new regular element: a fictionalised diary of a schools rugby player. He had been listening to youngsters on the bus home each day and was entranced by their language and attitudes.

A group of us spent most of one Tuesday afternoon tossing the idea about. The signatories to that proclamation included the sports editor, Brian Carey, and his team of Dave Hannigan, Fergus Cassidy, Fleur Muldowney and Gary Murphy.

I had noticed that my children’s classmates had started to acquire double-barrelled names, which even in Dublin 4 was considered up yourself. Anglo-Saxon names might have suited such couplings, but Murphy-O’Donnell and Hogan-McCarthy sounded bizarre. We decided that Paul’s hero should have one.

He wanted his character’s first name to be Ross, but the surname took a while as we tossed around ever-sillier combinations. I played with potential initials and came up a set that would echo a certain Dublin school that loomed large in the character’s formation.

Although Ross O’Connell-Keenan got a laugh, it wasn’t quite right. In the end we got there. A quick check of the phone book ensured we wouldn’t directly libel anyone. Then we kicked it over to Paul.

Each week a three-paragraph piece took creatine-fuelled Castlerock through the Leinster Schools Senior Cup and ended after the St Patrick’s Day final.

Paul realised he had something, and the following January – yeah, Ross repeated the Leaving. So what? – he convinced Brian Carey to give him 600 words. So this golden era continued with Ross at University College Dublin.

The column moved out of TribSport and grew in length and readership, but as it was unbylined there was a lot of speculation about its creator.

Paul was collared by one UCD student who was convinced it was written by two young sports scholars called Ciaran Scally and Brian O’Driscoll.

Paul later persuaded Matt Cooper, the editor of the Sunday Tribune, to publish a collection of the columns, which we spent four winter Sundays battering into shape in the empty offices. It was finished on St Stephen’s Day, when Róisín Ingle arrived with turkey sandwiches just as we were flagging.

The Miseducation of Ross O’Carroll-Kelly was launched at Blackrock RFC, where members complained that an “anti-rugby” book was being accommodated; a pair of boxer shorts were thrown into the gathering in protest.

Thousands of copies were stacked around the office for months, but antiquarian dealers now list that edition at €125.

We put out a sequel the following year, but Ross was on an upward trajectory; deals with O’Brien Press and Penguin Books followed.

The Sunday Tribune expired in January 2011, but I still dip into Ross every week, and marvel at the way Paul has rounded and developed the character while keeping up the standard over what must now be about three million words (or five War and Peaces).

Coining the name gives me no claim on those royalty cheques, but Paul is still a great friend, and he has always given me due credit.

When I dipped into the world of fiction three years ago, it was also via the world of schools rugby. My books are for children, however, so there’s no creatine to be seen, and the only scoring is with a rugby ball.

In homage to Ross, however, my hero attends a place called Castlerock College – and I keep up the reciprocal royalty arrangement with Paul.

Gerard Siggins worked for the Sunday Tribune from 1987 to 2011. His Rugby Spirit series is published by O’Brien Press

Take part in our Ross O’Carroll Kelly competition to find The Greatest Player Never To Play For Ireland by visiting irishtimes.com/rossmeister

Planning a move to Canada? Here’s everything you need to know
4