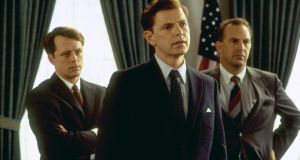 Thirteen Days (2000): Or how the Kennedys saved the world between games of touch football.

Primary (1960)
A group of America’s most talented young documentarians chronicled Senator Kennedy’s efforts to secure the presidential nomination for the Democratic Party. Bobbing and weaving in a style later known as Direct Cinema, Primary captures the chaos and energy of a political campaign.


PT 109 (1963)
The President’s unscrupulous father, Joseph Kennedy, persuaded the studios to make this leaden propaganda about JFK’s experiences in the second World War when he received the Navy and Marine Corps Medal as a torpedo boat captain.


The Parallax View (1974)
The circumstances of the assassination fired Hollywood with creative paranoia. Alan J Pakula’s masterpiece – featuring Warren Beatty as a journalist investigating a fictional political assassination – makes no mention of Kennedy, but is unmistakably a comment on perceived inadequacies in the investigation by the US government’s Warren Commission.

JFK (1991)
Oliver Stone, never knowingly outclassed in the Paranoia Olympics, added to the conspiracy baloney with an absurdly overlong, hilariously tendentious docudrama pointing the finger at (among others) New Orleans’ gay community. He later claimed his version was a class of alternate myth.

Thirteen Days (2000)
Or how the Kennedys saved the world between games of touch football. Roger Donaldson’s film lays out the grim details of the Cuban Missile Crisis with great efficiency. The administration’s showdown with hawkish generals still causes sweaty palms. Sadly, the representation of the Kennedys seems to have been derived from the most flattering of photographic coffee table books.


The Butler (2013)
Lee Daniels’s study of an African-American butler who served in the White House for 35 years takes some risks in its casting: Robin Williams as Eisenhower, John Cusack as Nixon, Liev Schreiber as Johnson. But, once again, a handsome, square-jawed actor is crammed into a suit to play JFK. James Marsden’s president is so crippled with pain – from Addison’s disease among other ailments – that he can barely stand up straight.

Parkland (2013)
Based on Vincent Bugliosi’s book Parkland (previously published as Four Days in November), Peter Landesman’s depiction of the assassination is a cinematic memorial, without reinvention or iconoclasm. Only Lee Harvey Oswald’s mad mom (Jaki Weaver in scenery-scaring mood) suspects a conspiracy. Everybody else at Parkland Memorial Hospital acts as if a secular saint has just been slain by a lone nut. Oliver Stone would point out that this is just what “they” want you to think.

‘In Ireland I’ve found another form of persecution’
10