Hilary Fannin: Marry an octogenarian billionaire? Knickers to that 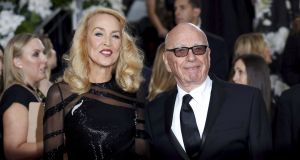 Well, here’s one certainty: I definitely will not be marrying an octogenarian billionaire any time soon. Unlike 59-year-old Jerry Hall, who recently announced that she would spend the next stretch of her tall, blonde life with what remains of Rupert Murdoch’s supplement to his three score years and 10, I won’t be livening up my sixth decade by shuffling down the aisle with 12 billion quid’s worth of scented groom on my sagging elbow.

Nope, you won’t catch me throwing diamond-studded confetti over the glowering heads of my new husband’s heirs and heiresses, who, in Murdoch’s case, amount to offspring accumulated from three previous marriages. You most certainly won’t catch me banqueting on black truffles and blue-foot mushrooms while my groom takes a nap or tries to remember where he left his glasses.

There are many reasons why, in my wilting 50s, I won’t be marrying a seasoned magnate; primarily, I imagine, because I won’t be asked. Unlike a set of jade tea cups or a bottle of Château Lafite, I’m not exactly collectable, not what one might describe as an asset.

I’m short, I’m not Texan and I can be a bit on the dumpy side, especially in January. Furthermore, I’ve never had afternoon tea with Jean-Paul Sartre and Simone de Beauvoir (who apparently invited the teenage Hall to join them at their table in one of their regular Parisian cafe haunts for a chinwag about being and nothingness) or indeed slept with Mick Jagger (although I did once have a swollen-lipped boyfriend with a wasp allergy).

I’m impatient, querulous, grudging and arrogant. I’m not terribly nice. I fall over in slingbacks, I can’t breathe in body shapers and I make a truly lousy blonde (and being blonde, as far as I can gather, is a prerequisite for marrying a magnate). I did dye my hair yellow once, and ended up looking like Dick Emery after a long and not particularly restful night in a hayloft.

The statuesque Hall has most certainly cashed in some of her I-hung-out-with- Warhol cool by opting to marry Murdoch. However, I bet she never goes out with her knickers stuck to her raincoat, as I did one morning recently. Yes, I headed off to the post office with an item of my underwear attached to the Velcro patches that stick my coat together; you know, the grippy bits that you mesh together to insulate yourself, to keep those Arctic winds from adding goosebumps to your already well-mottled interior.

My coat had been in the spin-dryer, and presumably the knickers must have been in there too, twirling around in the Saharan heat, nimbly dancing around in the sirocco-like warmth, courtesy of my electricity bill, cosying up to my practical, hard-wearing, phlegmatic and, dare I say it, deeply unattractive coat.

The “briefs” – what a mad word – were, still are, teal blue, a colour, in the light of a dull January, that is almost indistinguishable from my navy-blue puffer coat, which, in deference to a splintered sun, I had that morning left unclosed.

Anyway, I was in the queue for the post office, clutching my padded envelope, waiting my turn and reading about the endlessly fascinating Murdoch-Hall union over the shoulder of the bloke in front of me. I was wondering, not for the first time, why in the name of the sweet baby Jesus would any woman (or man) eschew their independence to marry an elderly billionaire. Seriously. Is it just the money? How much money does anyone need? Is it for love? Security? Sex?

She hardly needs the cash, I mused. And love? Maybe, but mind you, she’s barely just met him. Maybe it is the sex; hell, maybe he shoots shagging fairy dust.

Each to her own, I concluded, harnessing all the philosophical originality of a styrofoam cup and moving on up the queue. That was when I noticed my underwear swinging from the Velcro, clinging on to my solid coat, having a gay old time of it, excitedly observing the madly entertaining outside world in this heady suburban post office.

I shoved the offending item in my pocket and looked around for pitying glances, but no one seemed to have noticed anything unusual about another greying January woman in a bulky coat, inching along the post-office tiles.