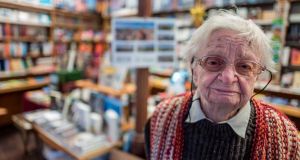 Helga Weyhe in her bookstore in Salzwedel, Germany. The store was founded in 1840, before Germany was a country. Photograph: John MacDougall/Agence France-Presse/Getty Images

After Helga Weyhe locked up her bookstore in the town of Salzwedel, Germany, each evening, she would make her usual commute – a trudge to the apartment upstairs. She had been making the same trip since the second World War, just as her father had before then, and as her grandfather had before him.

The H. Weyhe Bookstore is one of the oldest bookstores in Germany. It was founded in 1840, before Germany was a country. Weyhe’s grandfather Heinrich Weyhe bought it 31 years later. It endured through the first World War, the Weimar Republic, the Nazi regime. Weyhe took over the store from her father in 1965, four years after East Germany built the Berlin Wall, and guided it through communist rule and reunification with West Germany.

When the Iron Curtain was dissolved and those who had fled to the West returned to Salzwedel, they gathered at her store for readings she had organised

She locked up for the last time one day in December. She died at 98 sometime before January 4th; her body was found in her home, said Ute Lemm, a grandniece.

“With her life, she closed a circle,” Lemm said. “She died where she was born.”

Helga Weyhe (pronounced VIE-eh) became an anchor in Salzwedel, about 177km west of Berlin. The town was in the former East Germany, and during communist rule she stocked religious books that were unavailable in state-run bookstores, frowned on as they were by the regime. It was a boon to the faithful, and for her a quiet act of defiance.

Weyhe was a lifeline of sorts to her customers. She travelled far and wide after East Germans were generally allowed to leave for tourism, bringing back her infectious enthusiasm for the outside world. “She brought a little bit of the world to Salzwedel,” Lemm said.

When the Iron Curtain was dissolved and those who had fled to the West returned to Salzwedel, they gathered at her store for readings she had organised.

“They had bought their schoolbooks at the Weyhes when they were kids, and now, when they came back to the city, they were senior citizens,” Steffen Langusch, the town archivist, said. He held long conversations with Weyhe about local history in her office at the back of the store, amid piles of books and black and white photographs chronicling the store’s past.

Bookstores hold a special place for many Germans. During the pandemic lockdown, some were classified as “essential” businesses; the country’s 3,500 small, independent booksellers have been buoyed by a law that fixes book prices, preventing the small shops from being undercut by large chains and Amazon.

Weyhe in 2012 was the first resident after reunification to be formally honoured by the town, the equivalent of receiving a key to the city, and in 2017 she received a special national prize for her bookstore.

She took pride in stocking only books that she knew and approved of, although she would order customers almost anything online from her suppliers

“She wasn’t just an honorary citizen,” the town’s mayor, Sabine Blümel, said. “She was an institution.”

The store’s interior, with its well-stocked wooden shelves and display tables, has not changed much since Weyhe’s grandfather renovated it around 1880. Weyhe printed out quotations and poems and stuck them to the shop windows for the benefit of passersby.

She took pride in stocking only books that she knew and approved of, although she would order customers almost anything online from her suppliers.

As she told interviewers over the years, one of her favourites was a 1932 children’s book by Erika Mann, Thomas Mann’s daughter, called Stoffel Flies Over the Sea, about a boy who tries to visit his uncle in America by hiding in a zeppelin.

“It was probably the last bookstore in Germany where you could always buy a copy of that book,” Langusch said.

The book’s plot appealed to her personally. Weyhe’s Uncle Erhard lived in Manhattan and ran his own bookstore, at 794 Lexington Ave. near East 61st Street. His obituary in the New York Times in 1972 described him as “one of the last of the great art book dealers”. An old sign with the Lexington Avenue address hung on one of the shelves in Weyhe’s bookstore.

“Since she was a little girl, she dreamed of going to the States, but she had to wait her entire adult life until she was retirement age,” in the 1980s, said her grandniece, Lemm, the artistic director of a theatre.

Helga Weyhe was born on December 11th, 1922, to Walter and Elsa (Banse) Weyhe. Her mother also worked in the store. She graduated from high school in 1941 and was the first woman, and only the second person, in her family to attend university, studying German and history at institutions in Vienna and what was then Königsberg and Breslau.

With the war cutting short her studies, she went to work at the bookstore in 1944.

Weyhe never married and left no immediate survivors. Her extended family is hoping to find a new manager for the bookstore.