Where some just see hedges, topiary obsessives in suburbia see a chance to create amazing living sculptures – the dafter the better

Topiary is the art or practice of clipping shrubs or trees into ornamental shapes. Dublin men Colm Hughes and Nicholas Horan have both created very unusual shapes from the hedges in their gardens. Video: Bryan O'Brien 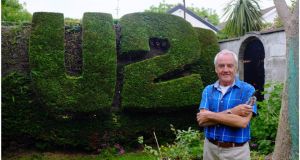 Colm Hughes with his U2 hedge in Malahide. Photograph: Bryan O’Brien 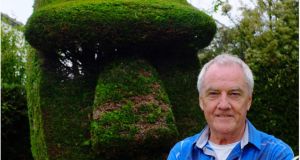 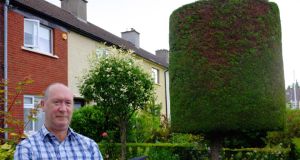 There’s something pleasingly eccentric about topiary. And it is more pleasing still when found in unlikely places. Seeing beautifully carved hedges in the sprawling gardens once owned by Europe’s aristocratic set is hardly surprising; they had staff to tart up their terraces for 1,000 years, after all. But topiary enters a different realm entirely when bushy replicas of Easter Island heads are found in housing estates in Malahide, or leafy champagne glass are located in modest back gardens in Milltown.

Colm Hughes has been living in Malahide since 1977. He retired from the world of accountancy four years ago. It is not hard to see what has kept him busy since he set aside his ledgers; his passion is on display for the world to see.

“I am into the garden in a big way,” he says. “I think it’s a great way of switching off. I am on a corner here,” he adds, gesturing at his home in a Malahide housing estate. “I didn’t want to put a wall up because it doesn’t block the wind; the wind kind of comes over the wall, whereas the hedge actually filters the wind.” And that is where the roots of his hedge fun lie.

For his windbreak, he went for a Leylandii hedge. It grows faster than most, and he figured he could count on 60cm of growth or so each year. “So far, so what?” you might be forgiven for asking. And what has a hedge used to break wind (titter) got to do with the art of topiary? Everything, as it turns out.

“One day I was tricking around with the hedge out the front and I decided I’d try and put the word ‘Hi’ on.” So he clipped away and Hi appeared. He was delighted how easily he was able to carve the friendly greeting on to his hedge, so he decided to put the house number on too. That was a different story. He lives at No 12, and while the 1 was as “easy as pie to put on”, the 2 was “very difficult because of the curves on it. The outside curves become the inside curves.”

But Hughes hacked away until he had a satisfactory 12 and then decided to add a Fáilte to the mix. He carved a 2½m wide, 2½m tall shamrock into his hedge. And then U2 appeared for his daughter, who’s a big fan of the band. It’s a long way from writing the names of the bands you love on your school bag.

“I just started tricking around with it, and I saw the head there so I carved it out. You know the way a sculptor sometimes tells you that he has a piece of stone and he didn’t carve a statue out of it, he saw the statue in it and he chipped off the bits he didn’t need? Well, it’s something similar.”

The soothing sound of clippers

On the other side of the city, Nicholas Horan’s neighbours in Milltown, Dublin, enjoy the soothing sound of hand clippers and the gentle burr of a hedge trimmer throughout summer and autumn.

He stands in his greenhouse, slowly and rhythmically sharpening the blades on his wood-handled clipper.

“Topiary has taken over my life for 24 years now,” he says. “Topiary and gardening started off as a bit of a chore. My mother was the green-fingered one in the family.”

As she got older and less able for the more manual elements involved in maintaining the garden, Horan “ended up being volunteered by the rest of the family. I started off just cutting the grass and then trimming the hedging, and look where I am now.”

Where he is now is in his urban garden, surrounded by shapely bushes. In his back garden is a small hedge carved into the shape of a champagne glass. “It used to be a brandy glass, but it got so overgrown I had to cut it back and give it a new lease of life,” he says.

In the front garden Horan has a huge lollipop tree. “It is the one that really got me started. It is a labour of love, and I have this great passion for it. It keeps me going.” He does it because he loves it, but his passion runs deeper than that. “Every time I see a tree out of shape and I bring it back to normal, I get a sense that the tree is emanating pleasure at being brought back to life again,” he says, before going back to his tireless clipping.

FIVE OF THE BEST: TOPIARY AROUND THE WORLD