Handbags: smaller and more expensive but are they dying out?

Broadside: Not as long as luxury brand bags come with their own waiting lists 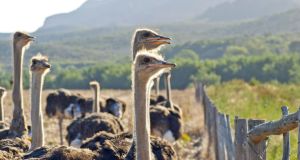 For the birds: Prada is selling an €8,000 ostrich skin handbag. Seriously.

Is the handbag dying out?

This year’s New York Fashion Week brought us Victoria Beckham make-up and the radical notion that you should be able to buy the clothes you see today in a shop near you tomorrow. (Has no one in the Big Apple ever heard of Penneys?)

NYFW (as the alphabetically gifted call it) also ratcheted evolution up a notch. Not since the demise of the dodo has the Frow (oh, do keep up) been so excited by Darwinism. The handbag is changing. Changing utterly. It is getting smaller.

To “pince” became the verb of the week as several fashion editors stuffed their belongings into teeny-tiny handbags by Simon Miller. The handles of the so-called Bonsai bags were so small that the owners had to pince their fingers together to carry them. They will also have to pince their fingers as they reach into their purses for the cash to buy them.

But will the handbag wane?

Believe it or not, a male version of the handbag came first. But while the manbag is rather favoured on the Continent, where Italians manage to carry them like proverbial stallions, Irishmen have never been too keen.

A pouch worn by Ötzi the Iceman, the oldest known handbag dating back more than 5,000 years, was probably stuffed with rudimentary weapons and bits of dead animals. The super practical Ötzi – as we must call it, for every important handbag now has a name – might actually have found favour with Irishmen.

Handbags emerged to fill a rudimentary need to carry random things. After machetes, they would carry money. Then men cunningly cemented their place at the top of the power pyramid by getting pockets sewn into their clothes. They could now stow keys about their person while women had to rely on hoiking bags crammed with plague-repelling nosegays and gender discrimination around with them.

Increased travel in the late 19th and early 20th centuries encouraged the development of sets of matching luggage, which included handbags for the discerning lady traveller. Bought by her husband, of course. That’s when the big boys swung into action, creating brands such as Louis Vuitton, Gucci, Prada and Hermes.

Things became ridiculous as the cult of the handbag grew. Handbags costing more than a family’s annual food bill. Handbags with “cult” status. Handbags with waiting lists longer than those for hip operations.

During our inaugural trip to the handbag hall of Brown Thomas, we discovered that Prada is currently selling a handbag for €8,000. Yes, really. It is made out of ostrich skin. Ötzi would have liked it.

Anyone convulsed by austerity might want to look away now. Prada does have something on offer for €240, though, so it’s not all bad – if you need a key-ring in the shape of a teddy bear, that is. Marc Jacobs will sell you a leather rucksack for €700 and Miu Miu will sell you a pony-skin handbag with the spots of a leopard for €2,200.

One wonders, though, if NYFW’s Bonsai bag, with its shrinking usefulness as a conduit of change and keys, might signal that the end of the road is fast approaching for the distracting cult of the handbag.

Is the handbag evolving into obscurity?

Unfortunately not. The handbag conspiracy continues as the fluffy little heads of women continue to be crammed full of thoughts of supple leatherwork rather than nuclear physics or peace in Syria.

And we’re not just taking about Paris Hilton. Even women you hope would know better appear to have been infected.

Last week, the Daily Mail reported that top human rights lawyer Amal Clooney sported a €1,440 red leather Dolce & Gabbana Anna bag on her way to give a speech on human trafficking to the United Nations. We are sure Mrs Clooney earned her fee and that no granddads had to sweat to buy it, but still.

A cursory check of the women who sit next to me in the office uncovered work bags and rucksacks containing such necessary items as emergency chocolate, a make-up bag that can be taken on an aeroplane (aka a plastic bag), a toothbrush and a pair of binoculars. (Yes, I thought that was strange too.)

The Bonsai bag may have had its moment in the sun at NYFW, but it doesn’t look like it will catch on in these parts. My colleagues had no intention of pincing anything – and, anyway, you could never shove an umbrella into it.

Self-compassion important in the age of Covid-19
7

H. pylori: tackling the germ behind stomach ulcers and cancer
9