Gifts for Prince George and Princess Charlotte from Ireland: hurling jerseys and dolls 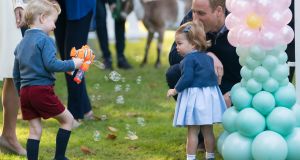 ‘Other gifts given to the Princess Charlotte and Prince George from Ireland included a “book” from Ballyraine National School in Co Donegal, and “toy dolls” for both of them from another “individual”.

Imagine Prince George and Princess Charlotte wearing little hurling jerseys and kicking about a sliothar in the grounds of Kensington Palace. They just might be, because the 2016 list of gifts given to members of the Royal Family has come out, and on it are hurling jerseys given to the royal children in May last from an “individual” in the Republic of Ireland.

Other gifts given to the children from Ireland included a “book” from Ballyraine National School in Co Donegal, and “toy dolls” for both of them from another “individual”. (The dolls in question were the popular Irish-owned Lottie Dolls .) It’s refreshing to think of both brother and sister playing with dolls; no gender specific gifts here.

The gifts for the children were accepted on their behalf by their grandparents, Prince Charles and the Duchess of Cornwall, when they spent three days in Donegal last May. They weren’t short of gifts either, although one wonders how Prince Charles felt about opening the box of toiletries given to him by a “member of the public”. He probably cheered up, however, when he saw the fishing flies, bottle of whiskey, three packets of seeds, tweed, and box of local produce that the good people of Donegal also gave him.

Hang on, a box of local produce? Would that not go off? Well, perhaps it never made it out of Ireland. According to the lengthy guidelines about the protocol of accepting and recording gifts, perishable items with a value of under £150 can be given to household staff, charities, or other third parties. If the perishables are over the value of £150, anything not “personally used or consumed” by the recipient goes to charity.

It’s a vexing fact that hundred of gifts are annually showered upon various members of the Royal Family; people who have all the money at their disposal to buy whatever they want, and who don’t actually need anything, even a box of toiletries. However, that’s spoilsport thinking, so to be alt-spoil-sporty about it, here’s a selection of some of the lovely, extravagant and frankly quite mad gifts the Queen received last year, in her 90th year.

A horse outside. A fancier horse (begging your pardon, Rubberbandits), than the one in the glorious video of the same name. This horse came from the Canadian Mounted Police. His name is Sir John, by the way, not A Bag of Yokes.

A silver Post-It note holder, on a leather base, form Scottish jewellery, Hamilton & Inches. Yes, that’s right, a Post-It holder, made of silver, and set upon a base of finest leather. No office should ever be without them. Apparently, the Queen really is like us, in that she’s a fan of the rectangular sticky notes. (One can only imagine the notes she writes herself: “Ask oneself if Sir John really was a better name for Canadian Horse Outside than A Bag of Yokes. What is A Bag of Yokes?”)

A limited edition Newmarket Monopoly set. That’s not Newmarket on Fergus, now. That’s Newmarket, England, where many horse training yards are located. The Queen, as we know by now, is very fond of horses. It’s calming to think of her playing Newmarket Monopoly over Christmas with the Duke of Edinburgh. Instead of buying vulgar things like houses and hotels for your Monopoly London streets, you buy mares and stallions to put into your training yards. I’m guessing the stallions are the hotels of Newmarket Monopoly, but none of them will be a patch on Horse Outside, who can’t be bought with money, only a Bag of Yokes.