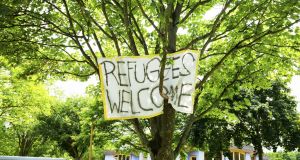 When the draft papers arrived from the Syrian army his father told him it was time to get out. So Hamad, a 24-year-old IT student in Damascus, hit the road for a perilous month and a half: through Turkey, Greece, Macedonia, Serbia, Croatia, Slovenia, Italy and France, and then, last September, into Germany.

German social services, overwhelmed, lodged him in a disused Berlin classroom with eight other men. Then an internet-based organisation called Flüchtlinge Willkommen, or Refugees Welcome – which is often described as Airbnb for refugees – stepped in.

It brought Hamad together with Constantin Thieme, a medical student who is also 24. Hamad now has a room of his own in Thieme’s apartment: a dresser, a cupboard, a bed and a window with a view of his new neighbourhood, in the gentrifying district of Wedding.

Thieme says it was easy to offer the extra bedroom through the website, which connects refugees with families, retirees, students – anyone with a room to spare.

He was already renting out his bedroom on a short-term basis; now he could help refugees at the same time.

Refugees Welcome was created in late 2014 by three young Germans, Mareike Geiling, Jonas Kakoschke and Golde Ebding. Their wanted to improve conditions for refugees, who often live in camps outside towns and cities, and therefore lack any chance to integrate.

The organisation now has six full-time staff and 60 volunteers, and has helped house 287 refugees across Germany.

Its success is spreading as far and wide as the refugees themselves, with national websites in Portugal, the Netherlands, Canada, Austria, Spain, Poland, Greece, Sweden and Italy. More than 5,000 flatshares are currently registered worldwide.

After users register an available room, the charity connects them with local refugee organisations, which have lists of registered asylum seekers. Refugees Welcome can even help find ways to pay the refugee’s rent, if needed. Thieme, for example, raised €500 from Facebook friends while waiting for the government to complete Hamad’s paperwork. “It was really amazing how positive the reactions were,” he says.

To ensure the match will be good, people offering lodging are asked what languages they speak, what their housemates, if any, are like, and to describe their city and surroundings. The website’s volunteers mediate any disputes or problems in flatshares, which must last at least six months, and usually last from eight to 12.

refugees-welcome.net; you can watch a video about Refugees Welcome at bit.ly/28JgFTe