Behind The News: Michael Gibbons, archeologist 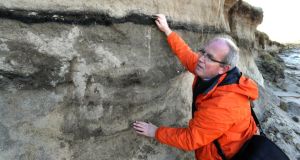 Archaeologist Michael Gibbons at the area on Omey Island where prehistoric remains were revealed by Atlantic storms. Photograph: Joe O’Shaughnessy

The recent archaeological finds along the western seaboard are creating great excitement among locals, but a Clifden-based archaeologist believes much of its value will be lost if resources aren’t put into recording and interpreting the artefacts.

“There is great excitement in the local population about this [previously] drowned landscape. I am contacted virtually every day by people finding things in the fields adjoining the coastline,” says archaeologist Michael Gibbons, who wants the Government to establish regional archaeological units to record and interpret these finds.

“The problem is that if nothing is done, it will be taken back by the sea,” says Gibbons, who suggests that some of the 6,000-year-old stone axes and other prehistoric materials have already been washed away.

A field archaeologist who leads tours to historic sites all over Ireland, Gibbons says that the discoveries of prehistoric settlements, a medieval harbour and early Christian burial grounds on the Galway coast has great potential for academia, local history and tourism.

He has seen how excited local schoolchildren were when they saw the 6,000-year-old stone axes.

According to Gibbons, recent discoveries by Dr Jim Higgins, Galway city heritage officer, contribute to one of the biggest collections of prehistoric artefacts ever found in the west of Ireland.

“Previous to these finds, we had three Mesolithic sites in the west of Ireland. Now we have four new ones,” says Gibbons.

“The storms have given us a new frontier to explore: an intertidal archaeological zone which people have a great interest in. But what has also been exposed by these finds is the inadequate heritage funding to record and integrate the new knowledge into our museums.”

Gibbons believes this is an ideal time to reform our archaeological response with best-practice scientific recording that takes place in Northern Ireland and Wales. He says £1.5 million (€1.82m) of lottery funding in the UK has been used for archaeological discovering following the storms there.

“We have plenty of local amateur archaeologists and professional archaeologists redundant from commercial road and development projects. For a small amount of money we could achieve a lot.”

Recent discoveries include a 4,000-year-old pink granite quern, or hand mill, found near Dog’s Bay; several Mesolithic stone axes; a late-medieval harbour beneath Doon Hill – along with a possible wreck site, both of them now visible at low tide; and early-Christian burial grounds near Cleggan.

Two separate early Christian burial grounds have been “eroded out” on St MacDara’s Island, off the Connemara coast.

Other known Mesolithic sites are at Ardmore, Finish Island, Streamstown Bay and White Strand on the Renvyle peninsula.

Calm down covidiots, it’s nothing personal
9