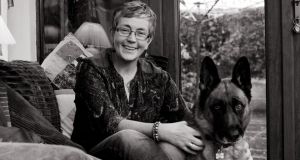 My father was the oldest boy of 12, so he was taken out of school to work on the family farm in Ballina in Co Cavan. It was a medium-sized farm: dairy, hens, pigs; haymaking in the summer.

His idea of education was that it was the key to life; it was everything. I grew up on that farm as one of six, and he always told us how lucky we were to go to school.

In the 1980 the fellas went to work for the EBS or Telecom or went to ag [agricultural] college. The girls went nursing or to the Civil Service, but I never wanted that. I always wanted to work with animals.

I went to London to study veterinary nursing. I worked very hard. I think our generation had more go in us; we were reared a bit harder.

There is so much sentimentality about animals now. Pets are pampered. When I was growing up, dogs in the country didn’t get neutered. If a dog in the country went out in front of a car and got injured, they’d probably get shot.

Most dogs were working dogs, gun dogs, retrievers, cattle dogs. The dog would have been lying at the door outside all day, and then put in the shed at night.

I don’t mean things were better then, just that they were different.

]]] I worked in London for three years as a locum. I travelled as well. I hitched everywhere: across India, Ireland, England. You tried to hitch with someone, but if you had to hitch on your own you did it.

Then I got a fabulous new job – and was in it for two months when my father was diagnosed with a brain tumour. I gave in my notice and came home. My brother came home from Australia, and we wound everything down on the farm; we sold all the stock. We took our father home, and brought the bed down to the parlour and took it in turns to look after him. He died three months later. There were two guards directing all the traffic at his funeral.

I had met Finnian in Dublin at a party the week I was to leave for London, and we got married in 1990, during the World Cup. We were on our honeymoon, camping in Donegal, when Packie Bonner saved that penalty. Will I ever forget it.

We watched the match in a pub. After the match the landlady went out the back and got a baby’s bath.

She put it up on the counter in the pub and poured all the bottles from the top shelf into it – all those bottles, like blue curacao, that nobody drinks – and gave everyone a pint glass of it.

]]] We didn’t know one single person in the whole county of Meath when we bought this house, 21 years ago. I never thought about the fact that I didn’t know anyone. I think once you’ve made the initial move from your first home you can live anywhere.

What was strange was that suddenly I was a person who lived in the country, but I didn’t have any land. That’s when it really came home to me that I had no connections to land or cattle or a farm any more.

I worked in Dublin for five years. I went out to Quarryvale, where Liffey Valley is now, doing TB testing on cows. Clondalkin was a village then, really rural; it was all green land.

I’ve been a vegetarian since 1982; I think I must be one of the oldest standing members of the Vegetarian Society in Ireland. It’s because I was working with animals all day and then I was going home and eating them. That didn’t tally with me.

For the past 20 years I’ve been a dog groomer. I like working for myself. It’s myself and Pat Kenny every morning in the shed.

We have two children, who are 19 and 21. I’d like them to stay here in Ireland if they want. They have things to offer Ireland if they stay. If they want to travel I feel that they should, but on their own money, not mine.

What I’d be afraid for their generation is that they are slightly cut off from other people. If my children want to know something, they Google it. It would never occur to them to ask someone. If someone dies they go on rip.ie, whereas I’d go and ask a neighbour. They tend to turn to technology for information rather than to humanity. It’s not a criticism; it’s just the way it is now.

]]] Ireland is much less conservative than it was. I think it’s great we can still wear jeans in our 50s. You can wear fake tan and a mini when you’re 60 and nobody bats an eyelid.

I think the rest of my 50s is going to bring great change, because my children are not living at home any more. They come home at weekends. The focus of your week changes. The weekends are busy and the week is quiet; it used to be the other way around.

Now I can be a bit more spontaneous. I’ve been mountain-biking in Italy with my son. I would never have done that without him. You’re tapped into a different generation and experiences because of your children.

Ten years ago I never heard any of my friends mention “joints” or “consultant”. Now they are saying those words. I hate to see people my age struggling with stairs. Do something to keep your joints going. You have a long way to go yet.