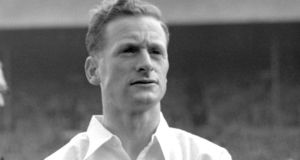 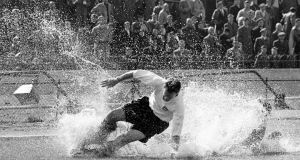 Tom Finney, who has died aged 91, was perhaps the most complete British footballer of all time, yet he failed to win a single major honour for either club or country.

Blessed with exquisite balance, skill and tactical intelligence, he played the game with a grace given to very few: he was never booked, sent off or even cautioned. Stanley Matthews may have been the public’s favourite, but Finney was the greater all-rounder.

In the era before players enjoyed freedom of contract, there were many single-club players. So integral did Finney become to Preston North End, his club from the age of 14 until retirement at 38, that when he went it virtually went with him, relegated to the second division, never to return.

His brilliance inspired and often carried the team. Bill Shankly, right-half for Preston when Finney joined (and later Liverpool manager), said: “Tom Finney would have been great in any team, in any match and in any age . . . even if he had been wearing an overcoat.”

Though he had a glittering career, Finney accumulated little silverware. The only medals he collected were for the 1941 Wartime cup (not regarded as a full football honour), when Preston beat Arsenal 2-1 and the 1951 Second Division championship.

He remained loyal to Preston when the Italian prince Roberto Lanza di Trabia tried to lure him to Palermo with a £10,000 signing-on fee, wages of £130 a month plus a bonus of up to £100 a game, a Mediterranean villa, a sports car and unlimited travel to and from Italy for his family. At the time, Finney got £14 a week with Preston; to top up his wages, he ran a plumbing business on the side.


War veteran
Finney was born a street away from Deepdale, the home of the club he would come to embody. He turned professional just after the outbreak of the second World War, which would steal years from his career.

He served with the Royal Armoured Corps and was a tank driver in north Africa and Italy, where he took part in the battle to capture Argenta in April 1945. He was also selected to play for several forces sides in Egypt, once lining up for the eighth army against the actor Omar Sharif, who was playing for King Farouk’s team.

Finney made his long-delayed league debut for Preston at the age of 24 against Leeds United on August 31st, 1946, the opening day of the first postwar season. It was the first of 473 competitive appearances for the club, in which he scored 210 goals.

Many comparisons were made between him and Matthews, whom he initially displaced on England’s right wing. Matthews was a showman, dubbed “the wizard of the dribble”, an out-and-out winger who would hug the touchline. Finney was more versatile (he played at one time or another in all positions across the forward line and could score and create goals).

He made his England debut in a 7-2 trouncing of Northern Ireland in 1946, the first of 76 appearances, in which he scored 30 goals, then a record.

England looked strongest when both wingers were deployed, with Matthews on the right and the versatile Finney playing out of position on the left. The first time they played this way was in May 1947 in Lisbon against Portugal, who were routed 10-0. Matthews was irresistible, but Finney was in such devastating form that his direct opponent, Portuguese captain and right-back Álvaro Cardoso, walked off in the first half, demanding to be substituted.

Finney’s personal milestones included being named footballer of the year in 1954, at the age of 32. He collected the award on the eve of the FA Cup final, a game from which he, and much of the nation, hoped he would finally obtain a winner’s medal.


FA Cup losing side
But Finney, normally so at home at Wembley, played what he later said was his worst game for Preston, as they lost 3-2 to West Bromwich Albion.

Finney continued to build up his plumbing business, which was very much a going concern by the time he retired in 1960. He went on to become president of the club, a magistrate and chairman of his local health authority.

He married Elsie Noblett in 1945. She died in 2004 and he is survived by their son, Brian, and daughter, Barbara.