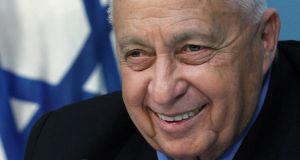 Ariel Sharon, the former Israeli prime minister who has died aged 85, was a remarkable blend of maverick and mainstay.

He fought in all of Israel’s main wars and gave the impression of having been involved in every political development since the nation’s birth in 1948. He was left in a persistent vegetative state by a stroke in January 2006.

Historians have blamed him for instigating unnecessary wars and enemies accused him of targeting civilians. A considerable number wanted him tried as a war criminal for allegedly abetting atrocities against Palestinians in Beirut in 1982. His supposed passage from warmonger to peacemaker was the stuff of countless editorials.

He was born at Kfar Malal, near Tel Aviv. His parents, Samuel and Vera Scheinerman, had arrived six years earlier from Russia. Ariel was barely a year old when Bedouins threatened the family home.

As a teenager he fought for Labor’s Haganah militia. But when he entered politics formally he moved to the right.

In his military career, he distinguished himself initially by his bravery in the 1948 war. In the six-day war of 1967 he brutally crushed dissent in Gaza.

In December 1973 he became a Knesset member and later helped create the Likud bloc. In 1975 he became security adviser to Labor prime minister Yitzhak Rabin.

Critics were to blame him for prolonging Israel’s involvement in Lebanon from 1982 to 2000, a conflict in which 1,200 Israeli soldiers and 17,000 Lebanese died.

Revenge
After the assassination of Sharon’s Lebanese ally Bachir Gemayel, Christian Phalangists took revenge, killing between 800 and 2,000 Palestinians at the Sabra and Shatila refugee camps in Beirut in 1982. An Israeli commission of inquiry held Sharon, who was defence minister, indirectly responsible.

After the collapse of Ehud Barak’s government Sharon became prime minister in 2001.

In 2005 he resigned from Likud and created a new centrist party, Kadima, which under his disciple Ehud Olmert swept aside Labor and Likud in the March 2006 elections. Binyamin Netanyahu was to replace him as Likud leader.

He audaciously dismantled all Jewish settlements in Gaza, in the teeth of fierce protests – these were colonies he had personally planned.

Stroke
Sharon’s stroke occurred a few months before he had been expected to win a new election and he was widely expected to withdraw Israel from most of the West Bank in a series of unilateral movements.

In the elections, Kadima, headed by Olmert, received most seats, followed by Labor. The new governing coalition installed in May 2006 included Kadima, Labor, the Pensioners’ Party, the Shas religious party and the secularist Israel Beytenu.

Colleagues had long spoken of signs of megalomania and recklessness in Sharon. Despite that, he was an educated man and a witty raconteur, revelling in food and classical music and with a wide circle of friends from diverse political traditions.