‘We look at an awful lot of things together’ 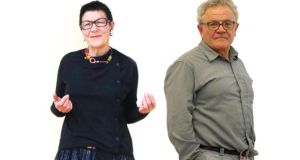 Janet Mullarney first exhibited in Ireland in 1991, after more than 20 years in Italy. A member of Aosdána, her work is influenced by her travels abroad to Italy, India, Mexico and Egypt and is many collections including Imma, the Hugh Lane Gallery and the Royal Victoria Hospital, Belfast


My first big exhibition was in Cork in 1991, but I didn’t meet Charlie until around 1994, at an exhibition in the Guinness Hopstore. He just came over to me: he was so friendly and open, so complimentary, lovely. To have this very friendly introduction made me feel safe. He’d listen to me, was interested– it was flattering.

We became friends. Then we started travelling: we went to the Venice Biennale and discovered we both love looking at art together. We went to India. I’ve been going there since 1994 and around 2009, I went back to work on a commission in this stone-carving area, and invited Charlie to visit me.

He’s a great travelling companion and we had a fantastic time. He’s open, receptive, has a fantastic sense of humour. We went on a tortuous, bone-shattering bus journey to see a magnificent temple. When we got there we just looked and absorbed, didn’t have to say anything to each other. In Mumbai, we were passing the slums and the next thing he was playing cricket. That’s Charlie, he chats to everybody.

I grew up in Dublin and when I was 18, I won first prize in an art competition and with that money I went to Italy. It was 1970, Ireland was a terrible place at the time. I had no idea what I was going to do. I went to art college for a year, dropped out, hitchhiked all over Europe and saw art history without studying. I didn’t have a fixed place. I did odd jobs. I was a golf caddy, worked on fishing boats. Then I went into restoration. I did skilled woodcarving, a long apprenticeship. My first sculpture came out over one weekend. My feeling was that it made itself: it was a little figure, just looking at the world, very autobiographical. It was telling me something.

I came back to Ireland in the early 1990s and Ireland has been very good to me, from my first exhibition here.

My mother, Maire Mullarney [Green party activist who home-schooled her 11 children] gave us a different view of how the world works. Systems, unsaid rules, baffle me.

I can phone Charlie and ask him for advice. If I’m asking about work, I know he’ll be very honest. I have great trust in his kindness, appreciate his empathy, his capacity for listening, his great sense of humour.
See Janet Mullarney’s work in a group exhibition, Reframing the Domestic in Irish Arts, at Highlanes Gallery, Drogheda, Co Louth from April 29th, during
Drogheda Arts Festival.

Charles Tyrrell is an artist who held his first solo show in 1974, while still a student at NCAD. A member of Aosd ána, his work is in private and public collections, including Imma and the Hugh Lane Gallery . Originally from Trim, Co Meath, he now lives in Allihies, West Cork

I saw Janet’s work before meeting her when an exhibition of hers came to the Crawford Gallery in Cork in the early 1990s. I was absolutely knocked out by this new work, the likes of which had not been seen here before. It was huge, life-size wood carvings, leaping, soaring figures. We were introduced by a mutual friend about a year later, at an exhibition opening in Dublin. We both seemed very pleased to meet each other, which was lovely, and the friendship grew from there.

When you admire somebody’s work, you’re interested in the person. Our work is diametrically opposed. I come from such a different form of formal, abstract art; she deals with a broad range of subjects, issues and ideas through a huge range of materials. There’s something complementary about our art forms.

We get on for the same reason, I think. Janet is deeply unconventional, comes at the world from a different angle from me, maybe I’m more straight and narrow, more pragmatic. Her take on the world is very different and always very stimulating. One part of our relationship is that she relies on me to pull her in off the edge of limbs that she heads out on through her unconventional approach.

She had an unusual upbringing which definitely seems to have set her a little bit outside the mainstream. It’s a terrific thing for her art, she’ll always throw a fresh light on the simplest things. She’s very good at counselling and advice. We clicked, let our friendship grow. We look at an awful lot of things together, enjoy art together.

I moved to West Cork in 1984 on a bit of a whim: four children later and I was pretty well grounded there. My then wife Sandy and I felt it was a good place to bring up children. The Allihies is an extreme place on the edge of the country, the edge of Europe, but extreme is good for making art.

I wasn’t a huge traveller. Janet opened up a new window for me by inviting me to visit her in southern India where she was working on a sculpture project. She was a really good travelling companion, there was a lot of fun, a lot of laughing.

She’s very supportive, I can turn to her. Art is a very lonely pursuit and I am quite gregarious. I have other supportive friends, but Janet is definitely of a particular hue because she is so individual. It’s exciting to have a friend like her.


An exhibition of new paintings by Charles Tyrrell will run in the Taylor Galleries, Dublin, until May 3rd, taylorgalleries.ie