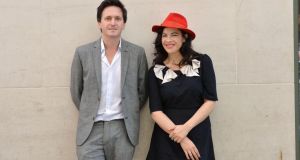 Camille O’Sullivan is a singer and actor. She became an architect and, after a near-fatal car crash in 1999, a full-time performance artist. She now tours internationally with her cabaret-style shows, arranged and performed with long-time collaborator Feargal Murray. Originally from Cork, she lives in Dublin with her one-year-old daughter in a house she shares with Murray

I met Feargal in 1997. He’d just moved in about two houses down the road from me in Ballsbridge with a girl I was working with – Feargal was going to be our musical director and pianist. I thought he was an incredible musician and we started going out together. He’s quite an enigmatic person: what kind of binds us is that we’re both soulful and spiritual. He’s a soft-spoken Derryman and quite a modest person.

We broke up the week before my car crash in 1999. I couldn’t go home to Cork after the crash so Feargal moved into the house to mind me. When you go through something as traumatic as that and someone gives themselves over to take care of you – feeding and washing you – that relationship is going to change. It went to a different level of care that bound us together. Now we live, work and travel together. Everybody says “you two should get married, you get on so well”, but that’s because we’re not going out.

After an accident, you’re looking at life through new eyes. After the crash was the first time I put on my own show. Feargal said, ‘I’ll do the music’. There were many years when we travelled away from each other, but we found that we missed that connection. It was only by working away from each other that we realised how strong we are together.

We live together in Dublin. My daughter’s a year and three months now. Her father doesn’t live with me but he’s a champion father; Feargal has an amazing girlfriend himself. It is a very big house, and I have a nanny to help mind the baby. It works, like some weird Swedish movie.

There’s a comfortability about our relationship when we’re not working – I have a good friend there who’s like a brother. We’ve been on the road quite a lot recently. I bring the baby with me. Of course you’re more exhausted, but it’s brilliant.

Feargal and I have our own way of talking, our banter is quite childlike. We’re very similar in that we lead quite a monastic life – when we’re at home, we spend a lot of time working away at creative things, not talking to each other; that can go on for days. Both of us love cooking and food, love nature and walks, going to films together. I’m very close to his family. His dad is such a gentleman, a gorgeous man. Of course we drive each other mad, will fight to the death over a chord. We’re like family, we know each other so well.

Feargal Murray is a pianist and composer from Derry who studied in Edinburgh and London. He has worked with Phil Coulter, Moya Brennan and others and co-wrote Camille O’Sullivan’s Royal Shakespeare Company-produced show ‘The Rape of Lucrece’. He and O’Sullivan have collaborated artistically for the past 15 years. He now shares a house with her in Dublin

I moved to Percy Lane in Dublin and became Camille’s neighbour. My teacher in Derry had recommended Edinburgh for a good music course, then I went to London to study contemporary composition, then moved to Dublin. I met Camille in the first couple of months – and I’ve had a whirlwind of a trip ever since with her.

We first worked on a musical show. I fancied her at first sight, of course. I was taken by her exuberance, her musicality and her charisma, on and off stage. We only went out together for a couple of years, had lots of fun, were very close for two years and started working together during that time.

Then the relationship petered out and the work started gathering momentum. She was still an architect and I was a full-time musician.

After a car crash she had a road-to-Damascus moment and decided to ditch architecture. We were both encouraging each other to do something together and started a little gig in the Cobalt Cafe.

I moved in with her after the car crash to take care of her. Our relationship might have been passionate, but this became a very bonding thing on a deeper level. It came very naturally, I wanted to care for her, she needed it. Her parents lived in a different city and she wanted to stay in Dublin, so I became her carer for a while. We were both in our mid-20s. There were moments when we didn’t know if she’d be able to use her hands again or walk.

It was a very scary time, but she got better and came back with a vengeance. We often joke that she has a tornado of a personality; I’m the eye of the storm.

I’m the second youngest of 13 children, with over 30 nephews and nieces. I have eight sisters and I’m comfortable in girls’ company. Camille knows my family – she was quite overwhelmed by the amount of people she had to get to know. And her parents welcomed me into their family with open arms.

Camille and I love art, clothes, glamour, cinema. We’re kindred artistic spirits, birds of a feather. I would still be quite religious, try to go to Mass; Camille is spiritual, too, in a different way. Living in the same house hasn’t stopped us going out with other people, the only major difference now is that she’s got a wee baby, which is lovely, she’s like my 31st niece. It’s all quite French.

Camille and I are in it for the long haul. It’s a great partnership and I see it going on for a long time.

Enjoy some Halloween fun with this bewitching cake
10