Feted chronicler of the black experience 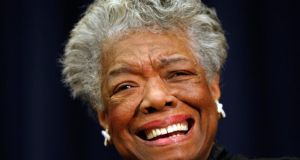 Maya Angelou: when asked exactly how many times she had been married she declined to be specific, ’for fear of sounding frivolous’. photograph: Gerald Herbert/AP

The writer Maya Angelou, who has died aged 86, won acclaim for her first autobiographical memoir, I Know Why the Caged Bird Sings (1969), a scathing indictment of the racial discrimination she experienced as a child in Arkansas and California.

The book is also a celebration of the strength and integrity of black women such as Angelou’s grandmother, who enforced the respect of white adults and endured the impudence of white children.

I Know Why the Caged Bird Sings, which gives a sympathetic and compassionate account of a beleaguered black community while humorously dramatising Angelou’s need to find self-fulfilment outside it, has had a wide appeal and continues to appear on school and university reading lists. The critic Harold Bloom noted that Angelou achieved with the book “an almost unique tone that blends intimacy and detachment, a tone indeed of assured serenity that transcends the fearful humiliations and outrages that she suffered as a girl”.

She was born Marguerite Annie Johnson in St Louis, Missouri, the daughter of Bailey Johnson, a naval dietician, and Vivian (nee Baxter), a nurse, professional gambler, bar owner and entertainer. The name Maya was given to her by her brother, also Bailey. When her parents separated, her father sent three-year-old Maya and her brother to live with his strong-willed and deeply religious mother, Annie Henderson, in the small, segregated town of Stamps, Arkansas. Raped as a child When she was seven, she was raped by her mother’s boyfriend. This traumatic incident, recorded in her autobiography, and the man’s subsequent murder, for which she felt responsible, led her to stop speaking for five years. She was encouraged to read works by black authors and later persuaded by a local educated black woman, Bertha Flowers, to read aloud from the works of Austen, Dickens, Shakespeare and various poets. She thus acquired a love and appreciation of the spoken word which informed her writing and her performances of her own and other people’s works.

Angelou was later taken by her mother to San Francisco, where she attended high school. Aged 14 she ran away, but later returned and finished her education. She also took lessons in dance and drama, gave birth to a son and worked as a streetcar conductor, a dancer and a cook in restaurants and hamburger joints.

In her early 20s, she was married briefly to a former sailor and aspiring musician, Anastasios Angelopulos, from whom she was to borrow her professional name. She trained as a dancer with Martha Graham and in the mid-1950s toured Europe with a production of Porgy and Bess. Back in New York she appeared off-Broadway, met the writer James Baldwin, joined the Harlem Writers’ Guild and became involved in the civil rights movement.

In 1961, she moved with the civil rights activist Vusumzi Maketo to Cairo, where she worked for the Arab Observer. Later she moved with her son, Guy, to Ghana, taught at the University of Ghana and worked for the African Review. Here she met the pan-African activist Malcolm X. After his assassination in 1965 she began to work more closely with Martin Luther King. When King himself was assassinated in 1968 she was devastated.

Friends such as Baldwin encouraged her to begin writing, and in 1969 she completed I Know Why the Caged Bird Sings. A further six volumes of memoir were to follow between 1974 and 2013. A bible and a bottle She once described her writing regime thus: “I keep a hotel room in which I do my work - a tiny, mean room with just a bed, and sometimes, if I can find it, a face basin. I keep a dictionary, a bible, a deck of cards and a bottle of sherry in the room. I try to get there around seven, and work until around two in the afternoon.”

Angelou vigorously disassociated herself from Anglo-American feminism, which she felt lacked an appreciation of the importance of love and humour. She was nevertheless an outspoken advocate of what she called “womanism”, a quality combining strength, endurance and innate dignity that she found particularly in black women. She wrote and delivered a poem for Bill Clinton’s presidential inauguration in January 1993 and campaigned for Hillary Clinton in the 2008 presidential primaries, and thereafter for Barack Obama.

Angelou published more than 10 volumes of poetry, composed songs and wrote or co-wrote the scripts for more than a dozen plays, films and television programmes.

She also appeared in the TV mini-series Roots and had roles in films such as Poetic Justice and How to Make an American Quilt. In 1973 she married Paul du Feu; they were divorced in 1981. When asked, she was reluctant to specify how many times she had actually been married – “for fear of sounding frivolous”, she said. She is survived by her son, Guy.