Family Fortunes: The donkey carts have gone, but much remains in Killorglin

The journey from Belfast to our Kerry holiday must have been arduous in that time before modern road networks, but as children we were oblivious 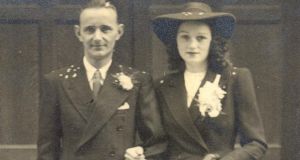 Trisha Chesser-Smyth’s parents on their wedding day in 1927

My mother, originally from Drogheda, Co Louth, celebrated her 90th birthday on June 12th, 2015, with lunch and champagne with her family. Dad, originally from Clones, Co Monaghan, died in October 1988, at the tender age of 70.

It all began a long time ago, with their wedding day in 1927 in the Pro Cathedral in Dublin.

Dad worked in the Irish Press as a circulation official. After they got married, his work took them to Derry and later to Belfast.

The family gradually expanded in those years to a feisty total of three boys and five girls. Mum worked tirelessly to raise the family. Dad worked tremendously hard too; he would often remark that “hard work is good for the soul”. Despite the hard times, my parents always planned an annual holiday, which always took place in Ireland.

One of my fondest holiday memories is from Cromane in Killorglin, Co Kerry. The journey from Belfast at that time, before the modern road networks, must have been arduous, but as children we were oblivious, as all eight of us managed to fit in to that magical estate car, singing relentlessly on our way to the Kingdom.

Each morning just after sunrise, we would run barefoot from our cottage into the expansive Atlantic Ocean without a care in the world and enjoy an early morning swim. Donkey carts would routinely ride the roads, which were a unique and special sight for us as children, and then there was Puck Fair.

Last year I returned to Cromane. There were no donkey carts, but the single, narrow road remains and there is evidence of the original stone walls of some cottages. The church, and the public house where lots of lemonade and Tayto crisps were consumed, still stand and are testament to those memories.

I am a victim of emotional abuse ... it felt like my husband had died
4

How many after-school activities should a child do?
8