Emer O’Toole: Science and sociology are on the side of pro-choice 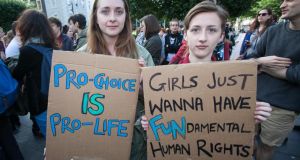 I’m 14. I’m in religion class. We are having a “debate” about abortion, but there is no pro-choice side. Instead, each group takes its turn to give reasons as to why abortion is always wrong. Pre-internet, our information comes from propaganda we’ve been handed by anti-abortion fanatics at a stall in Galway city. At one point, a girl reads a poem from one of the leaflets, in which a foetus speaks to the “mammy” who is aborting it. One verse goes something like this:

My little hands, my little feet,

My baby face, my baby heart”

Roughly one in 12 Irish women of reproductive age have had an abortion. That day, however, I had no concern for women. I went home and explained to my mother that abortion is murder because the foetus is a person too.

Many Irish people I discuss abortion with believe aborted embryos and foetuses to be sensate and sentient. They believe that the foetus can feel pain and can think. This misconception is unsurprising: with religious control of much our education system we are propagandised at school; further, pro-choice activists don’t take sufficient time to explain the science around embryonic and foetal development.

The overwhelming consensus in the scientific community is that foetal pain is very unlikely until the third trimester of pregnancy. A comprehensive 2005 meta-study by the Journal of the American Medical Association concluded this. It is the official position of the American Congress of Obstetricians and Gynecologists, which in 2013 urged legislators to remember that “sound health policy is best based on scientific fact and evidence-based medicine”. A 2010 report from the UK’s Royal College of Obstetricians and Gynaecologists concludes that “the lack of cortical connections before 24 weeks, therefore, implies that pain is not possible until after 24 weeks . . . Furthermore, there is good evidence that the foetus is sedated by the physical environment of the womb and usually does not awaken before birth.”

A more accessible 2007 report from the UK House of Commons science and technology committee (described by Ben Goldacre as a “masterclass in spotting fallacious science”) says the same.

There are a handful of reputable scientists, such as Dr Kanwaljeet Anand, who believe that foetal pain may develop from 18 weeks. His research is often quoted by American conservatives who want to lower abortion thresholds.

However, in Anand’s own words, the “issue of foetal pain does not have much relevance for abortion, since most abortions are performed before the foetus is capable of experiencing pain”.

Those of us who recognise the urgency of repealing the Eighth Amendment need to dispel the myth of the sensate and sentient foetus from the Irish abortion debate. Articles such as Colm O’Gorman’s excellent piece in the Irish Independent do the important work of explaining that our abortion law violates women’s human rights. But if people believe that the procedure involves the painful death of a frightened little human, then this is difficult to understand. We must explain that the best scientific evidence tells us that the foetus does not suffer.

The anti-abortion lobby uses individual anecdotes to argue that women regret their abortions, while rigorous studies say that more than 95 per cent feel it was the right decision. Further, emotional harm after an abortion is strongly correlated with social stigma and lack of support: prejudice that harms women who have had abortions. Four thousand Irish women choose to terminate pregnancies every year. I believe they know what’s best for them. Demonstrably, the anti-abortion lobby does not respect or care about women.

And so they shift attention to the embryo or foetus, ascribing it sentience, the capacity for pain, and ultimately, human rights on par with the woman carrying it. When they do this, I’ve often heard pro-choice activists reply that “the foetus isn’t a person”. But that’s not enough. We have to take the time to explain why ascribing the foetus equivalence with the thinking, feeling human carrying it is a fallacy.

Some people believe that life begins at conception, that God plants a soul in every zygote the moment two gametes meet. This makes the morning-after pill murder; it makes stem-cell research murder; it means that God wastes a lot of souls, seeing as about 30 per cent of zygotes don’t implant and a further 30 per cent are lost before the pregnancy is discovered. People are entitled to their beliefs, but they’re not entitled to dictate women’s rights based on them. Our current legislation, the Protection of Life During Pregnancy Bill, protects the life of the unborn from implantation. That Ireland considers a blastocyst to have moral equivalency with a woman or girl is evidence of deeply rooted sexism.

In the wake of last month’s damning Amnesty International report, last year’s UN Human Right’s Committee Report, as well as the catastrophic failure of this Government’s 2013 legislation, under which, already, a suicidal teenage rape victim was forced to carry to term, it is hard to believe anyone could fail to recognise the need to repeal the Eighth Amendment. Yet, this month, 8,000 people attended an anti-abortion lobby in Dublin. As activists for women’s rights, we’re operating in a climate of historically inscribed prejudice and political cowardice. We need to be ready to engage at every level of the debate. The scientific and sociological evidence is on our side. Learn it. Use it. Free Ireland of this national shame.