Emer O’Toole: My past life as a receptionist for an Irish ‘Panama’ company

Broadside: If a company name other than ours flashed up on my phone, I had to answer with that name 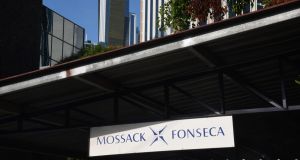 In 2008 I worked for a company that helped rich people to avoid paying taxes. Not exactly my proudest accomplishment. In case you are wondering why a financial company would want to employ a girl with degrees in areas such as philosophy and drama, here’s how it happened.

I finished up my master’s and signed on with a temping agency. They sent me to a receptionist gig, and the company – amazed at my ability to answer phones and send polite, grammatically correct emails – liked me and kept me for a few months. I liked them too: everyone was lovely and nobody seemed to mind that I dressed funny.

I think one of the reasons they kept me on – aside from my strong email game – is that one of the directors noticed me reading the company website, and took a few minutes to tell me about it. I am always interested in what is going on around me. And it is precisely because I paid attention while I worked there that I was thoroughly unsurprised to see the company’s name appear in Colm Keena’s analysis of the Irish connection to the Panama Papers last week.

It is important to reiterate that connection to Mossack Fonseca and offshore activities does not imply illegal activity. Although the anonymous whistleblower believes many prosecutions could result if law enforcement accessed the Panama Papers, let’s remember that most of these financial activities are legal. There are legitimate uses for offshore services. And, even in less legitimate circumstances, activities might exploit loopholes and be morally dubious but still operate within the confines of the law. There was a common joke in the office that acknowledged this: “It’s not tax evasion; it’s tax avoidance.” The semantics are the same, but the legal status is not.

It is perhaps also important to note that I am talking about memories from eight years ago, and memory is a notoriously fallible thing. Further, I wasn’t an undercover journalist, I was a 24-year-old more interested in the weekend than the nine-to-five. And, finally, I have no background in finance, so I do not have the terminology to explain what I saw.

These caveats notwithstanding, I will relate what I remember. And I can say what I believe, which is that the company was engaged in methods of enabling people – many of them very wealthy – to use offshore services to pay the least tax possible. I believe that these methods involved intentional obfuscation of truth and loophole jumping. These methods deprive the public of the money that it needs for schools, hospitals, and social services, while catering to individual greed.

As a receptionist, I had to check a screen before answering the phone. If a company name other than ours flashed up, I had to answer with that name. There were dozens of these companies with discrete numbers that redirected to ours. For example, if the screen read “Bigtime Associates”, I would have to answer with “Good afternoon. Bigtime,” even though I’d never heard of the company. It was very important that I got this right. During my first few weeks, there were regular tests in-house to ensure I never answered with our company name when a call was redirected from one of these numbers. On answering, I had to pretend that whomever the caller was looking for was in a meeting, and take a message, which would be passed to a colleague responsible for that company. It was an elaborate facade.

To the best of my understanding, many of these faux-companies were entities – sometimes incorporated by us – with directors and shareholders in both Ireland and overseas locations, including the Seychelles and the Bahamas. And, again to the best of my understanding, often the legal directors and shareholders resident in Ireland were not actually business people. They were just regular Joes who got paid for the use of their passports and signatures. We would courier documents out to them. They would sign. The new company required for someone else’s tax avoidance got directors. Joe got a couple of bob for nothing.

When I asked my colleagues on our lunch hours to explain it to me, I got answers that included complex phrases such as “shell corporation”, “double taxation agreement” and “nominee services”, but the overall intention was clear. This was all about tax minimisation. There was an entire industry built on creating convoluted corporate phantoms through which those with the means could channel their profits and assets in order to avoid social responsibility.

We jumped through any loopholes we could find; the circus masters gave us a nice cut.

I am delighted that the Panama Papers are beginning to shed light on the myriad ways the rich hide their wealth, on how the financial industry works against the public interest. But let’s remember that although many of those implicated will be found to have acted legally, this does not mean they have acted morally. The role of the press and of the State, as I see it, is to use these revelations to rigorously assess not only the legality but also the function of these activities, and to help eradicate financial services that rob the poor to gild the rich.