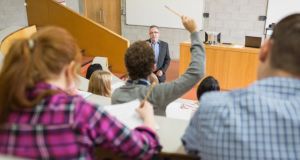 ‘Why are young Canadian students’ hands in the air while the young Irish transcribe every word their lecturer utters?’ Photograph: Thinkstock

A few years ago, a visiting scholar to the School of Canadian Irish studies in Montréal, where I now work, was preparing to teach his first class. He told my head of department that he had a semester’s worth of great lecture material prepared. My head of department warned, “they won’t let you lecture at them here – they’re different to Irish students”.

Unfazed, our visiting scholar began a lesson on the penal laws. He was enumerating the public institutions from which Catholics were forbidden when a hand shot in the air. The student asked, “How could they tell who was Catholic and who was Protestant?”

Since my arrival at Concordia University, I’ve been thrown many such curveballs. Material I know inside-out is consistently cast in new light by students whose confidence – in their ability to contribute, in their right to ask questions – is startling.

The current generation of North American students can get a hard time. Dr J Twenge’s book Generation Me designates them demanding and entitled, and Time magazine ran a cover two years ago calling them the “Me Me Me Generation” and describing them as “lazy, entitled narcissists who still live with their parents”. Elsewhere, on publications such as Slate, anonymous “liberal” professors declare that they are “terrified” of their students’ hardline politics.

Perhaps it’s slightly different in Quebec, where student protests have kept fees low, avoiding the customer satisfaction ethos creeping into university administration across the US and the rest of Canada, but all this is alien to me. I feel privileged to be in an environment where my students will honestly communicate any discomfort with my material or methods. What some consider entitled, I find self-assured and critically engaged. This generation’s productive cynicism might be epitomised by a photoshopped mock-up of the “Me Me Me” Times cover, which proclaims: “We pissed their future away on endless war, golden parachutes for bankers and handjobs for stockbrokers.”

I’ve never taught at an Irish university – just English and Canadian ones – but I’ve studied at NUI Galway and Trinity, and have many academic friends working in the Republic. I’m extremely grateful for the excellent university education I received in Ireland, but it’s useful to draw some comparisons between Canadian and Irish classrooms. In my experience, and that of many friends and colleagues, the level of engagement in my North American students is difficult to draw out of their Irish counterparts. In short, it can be very hard to get Irish students talking.

I remember this from my own undergrad, where, mega-nerd that I was, I constantly fought (and often lost) an internal battle to keep my mouth shut, lest I out myself to my peers. Once, in a seminar on gothic literature, my (brilliant) lecturer asked a thought-provoking question that hung awkwardly in a fog of silence. Eventually, I began to speak and was rebuked with a frustrated “not you”. I was embarrassed, but knew it was fair: I had been the only person answering questions for the first few weeks of term.

So why are the young Canadians’ hands in the air while the young Irish are transcribing every word their lecturer utters as scripture? It’s certainly not a question of capability. I had countless intellectual conversations with my university friends; they just happened over pints in Tigh Neachtain instead of in class. Equally, it’s not the quality or methods of educators: my lecturers at NUIG were – almost to a person – knowledgeable, accessible and passionate, and I know how much energy my Irish academic friends put into their teaching.

There are a number of factors that I can see. First, a second-level education characterised by rote learning does not stand students in good stead for the arts and humanities, where critical thinking is key and facts are open to reinterpretation. There’s a confidence issue here, and Irish students need to be taught from an earlier stage that their own informed opinions are far more valuable than off-by-heart sample answers.

Second, while we all know that it’s deeply uncool to be smart at secondary school, in North America this seems to have changed by the time students get to university. In Ireland, not so much. Is this a postcolonial hangover? Is there an unspoken disaffection with perceived authority, whereby engagement is complicity, whereby dissent is best expressed by expressing nothing? We need to let students know that, in large part, they are at the helm of their university experience.

Finally, friends in many disciplines tell me it’s especially hard to get young women talking, a fact probably tied to institutionalised sexism in Irish universities. Combatting this sexism will give young women role models and help them to find their voices.

In scientific disciplines a shy student body might not matter too much, but in the arts and humanities it’s of huge importance. The most crucial skill we foster is independent thought and an ability to analyse the world in structured and productive ways. The arts and humanities teach people to question orthodoxies: to research, critique, challenge, solve problems. And, as our disciplines are attacked by those who value education only in terms of its economic utility to global capitalism, we urgently need confident graduates who can speak truth to power.