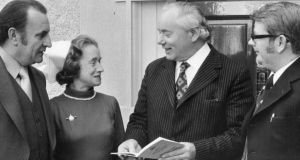 Former Fine Gael TD and minister of state Dick Barry played a prominent role on the Cork political stage but also served as a stalwart for Fine Gael through what were often politically hard times for the party.

One of a family of 14 born to schoolteacher, Patsy Barry and Eileen Arnold, Dick Barry was born in the village of Bartlemy in the parish of Rathcormac near Fermoy in north Cork where he was to establish a political base for himself that lasted three decades.

Growing up in the 1930s, Barry was a keen admirer of Michael Collins and his immersion in politics came early when, as a youngster, he rode on horseback at the head of a group of Blueshirts including his brother Denis as they marched to Fermoy to hear Eoin O’Duffy speak.

The family had purchased a farm at Mondaniel in Rathcormac in 1925 and following his education at Bartlemy National School and Christian Brothers College in Fermoy, Barry attended Glasnevin Agricultural College. While there, he showed his entrepreneurial spirit when, together with Denis, he purchased a reaper and binder and did contract harvest work before obtaining his first full-time post as a tillage inspector in Kerry and Leitrim with the Department of Agriculture.

Returning to his native north Cork in 1948, Barry set up a small vegetable shop with his good friend, Donal Barry, on Patrick Street in Fermoy and two years later, he made his first foray into representative politics when he was elected on to Fermoy Urban District Council for Fine Gael.

Although he failed to take a seat in the 1951 general election, Barry soon established himself when he won a byelection in 1953 caused by the death of Labour TD, Seán Keane.

It was to be the first of seven successive general election wins for Barry who, despite various boundary and name changes over the following two decades, comfortably held his seat in Cork East for Fine Gael right up to the 1981 general election when he retired.

Barry had married Margaret Butler from Co Waterford in 1954 and together they opened a pub with a day licence and auctioneering business on Patrick Street in Fermoy with Margaret looking after the business during the week while Barry was in Leinster House.

The couple had four children – Pat, Eleanor, Myra and Michael – and by the time he retired from politics in 1981, Barry had been joined in Dáil Éireann by Myra who won a seat in a byelection in 1979 occasioned by the death of Fianna Fáil TD, Seán Brosnan.

When Barry himself stepped down in 1981, he had enjoyed his own experience of ministerial office, having been appointed parliamentary secretary for health by his close friend, Liam Cosgrave, in the 1973-77 Fine Gael-Labour coalition.

Although he was steeped in Fine Gael, Barry wasn’t, as his good friend, Fr Neilius O’Donnell, told mourners at his funeral, “a party politician at all because . . . all over the east Cork area, Dick would help anyone, no matter who they were”.

Dick Barry is survived by his wife, Margaret, and children Pat, Michael, Eleanor and Myra.

Pollan is unique to Ireland so why don’t we eat more of it?
7

When it comes to decadent dressings, all kale Caesar
8