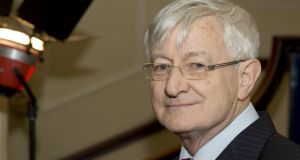 The death has taken place of Desmond M Clarke, professor (emeritus) of philosophy at University College Cork and member of the Royal Irish Academy. Known as Des to all, he was one of Ireland’s most distinguished scholars.

Born in Dublin to Margaret and Jim Clarke, he came from a large family. At a very early age he showed academic promise, winning a scholarship to Synge Street CBS.

Following his secondary education, he joined the Capuchin Order and after novitiate, he completed a BSc at UCC, followed by a licentiate of theology from the University of Lyon and a bachelor of philosophy at University of Leuven, Belgium.

He completed his PhD in philosophy at the University of Notre Dame under the direction of the scholar, later his life-long friend, Ernan McMullin. It was while studying in Notre Dame that he met his future wife, Dr Dolores Dooley.

In 1991 he was awarded a DLitt by the National University of Ireland on the basis of his published work. He was awarded the 2014 gold medal by the Royal Irish Academy for his internationally recognised outstanding scholarly contribution to the humanities.

He and his wife arrived in UCC in 1974 and both remained members of the department of philosophy until retirement. Clarke won many awards and scholarships, including a CNRS visiting fellowship (Le Centre National de La Recherche Scientifique) Paris, a Fulbright Scholarship (US), a Jean Monnet fellowship and many more.

Clarke was the founder and a general editor of Cambridge Texts in the History of Philosophy – 76 volumes have been published with new translations of non-English texts from ancient Greek, Latin, Arabic, Hebrew, French, Italian and German.

He was a frequent contributor to public debate in Ireland through a series of articles in The Irish Times on political and ethical issues. He had no fear in speaking truth to power. His early book Church and State (1984) was a significant critique of the Catholic Church’s stranglehold of Irish society, a subject which few Irish academics were prepared to take on at that time.

He wrote the definitive biography of René Descartes and is regarded as the most internationally recognised expert on his life.

Two of his books were published this year: French Philosophy 1572-1675 and Voltaire’s Treatise on Toleration. These were completed ahead of schedule as he battled motor neuron disease.

During his career at UCC, he served as chair of the academic staff association, dean of the faculty of arts, vice-president of UCC, head of the department of philosophy, and chair of Cork University Press.

He used his position as a poll-topping member of the UCC governing body to challenge the “pro-business” emphasis of UCC president Prof Gerry Wrixon.

His complaints led to an external inquiry which found no evidence of corruption or breaches of the law but criticised aspects of management, citing some “hasty decision-making” at administrative level and a lack of consultation.

Colleagues and students describe him as likeable and a man of honesty and integrity. He bore his devastating illness with great courage, applying his intellectual insights to his condition.

Apart from reading 17th-century books in libraries all over the world, he had another passion – cycling. He eagerly participated in Stephen Roche’s cycling camp in Mallorca and in later years took great delight in cycling with his grandchildren.

His ideal holiday entailed riding his bike through the French countryside and towns and visiting the chateaux and vineyards of Bordeaux and the Loire.

His day was complete when listening to Beethoven, watching the Tour de France and dining on good French food and wine.

Clarke is survived by his widow Dolores, daughters Nora and Ann, his brother Brian, sister Patricia (Lynch) and his four grandchildren.

Róisín Ingle: After seven months of this headwreck, what needs to be done feels harder than ever
9