Derek Paine: A builder of boats and collector of Greystones heritage

Obituary: His writings form a unique legacy chronicling the social history of Greystones 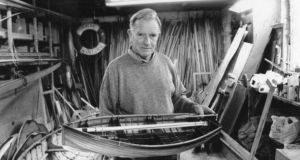 Derek Paine, who has died aged 84, led a life intimately and devotedly connected to the sea and to the community in which he lived. He was a renowned builder of boats and a collector of photographs and like ephemera, which he compiled into seven volumes, a unique legacy chronicling the social history of his beloved Greystones.

Paine’s rear garden in the north Wicklow seaside town at times resembled a small boatyard. From his clutter-filled workshop there emerged a succession of repaired and newly built wooden boats.

At the same time, his house accumulated an ever-growing number of photographs as his interest in local history became more widely known and people handed over their collections for posterity.

Paine’s deepest maritime affection was for the Water Wag, a 13ft-long clinker-built sailing boat and the oldest “one design” dinghy in existence. Water Wag enthusiasts have been racing the timber boats since 1887 and the class was re-invigorated in the 1980s, largely due to the craftsmanship of Paine, as the Wag Club, based in Dún Laoghaire, acknowledged by declaring him an honorary life member.

Derek Paine was born in the upper bedroom of Glencoe, one of the few homes, then fronting on to Greystones North Beach, to survive the sea storms of 1929-1931. Through the small front bedroom window on the gable, among the first sounds he would have heard were gulls and waves breaking on the pebbles.

His parents were Ernest Paine and Emily (nee Thompson). Ernest was a traveller for Berger Paints but also made model boats for Helys department store. Paine’s uncle, George Thompson, was a lieutenant commander in the Naval Service and captained the LE Macha when, in 1948, it repatriated to Ireland the remains of the poet WB Yeats from France. A grandfather, Robert Thompson, spent 22 years in the Naval Service. Colour blindness prevented Derek following their lead, although he attended the Hibernian Marine School in Clontarf with that in mind. Instead, his working life was in insurance and finance, but retirement in 1986 allowed him to indulge his boatbuilding passion to the full. He built four new Water Wags and restored to sailing some 15 others, as well as keeping afloat innumerable other small craft.

Paine’s other consuming interest germinated from an idle interest in Greystones postcards, and other documents relating to the town, that he began collecting in the 1950s. By the 1970s, he had sufficient to mount photographic exhibitions.

Gradually Paine assembled a priceless archive of images from the mid-19th century to the early years of the 21st century, covering Greystones, Delgany, Bray, Enniskerry, Kilcoole and Newtownmountkennedy. The archive formed the basis of his Pictorial History of Greystones series of books, the first of which he published in 1993. In seven volumes (with material for an eighth, which son Gary is contemplating), they chronicle the emergence of Greystones from the Victorian and Edwardian era through the 20th century – a comprehensive social history of a small town.

Paine was active in the Greystones Civic Association, under whose auspices he was instrumental in acquiring the base of the Kish Lighthouse in 1966 to extend and protect the now demolished original Victorian harbour, as well as the two ships’ anchors which survive to this day. He was a founding of Greystones Sailing Club, and had a boat moored in the harbour for many years.

He was a devoted family man. A favourite pastime in retirement, when he was not tinkering in his workshop, was walking the coast at Kilcoole or around Bray Head with his dog, Tyson.

Derek Paine is survived by his wife Hazel and their three children, Linda, David and Gary; six grandchildren; and a brother, Stanley.

Tommy was a kind, gentle, friendly and compassionate person and a great neighbour