Curiouser and curiouser: the key to health and happiness?

Research suggests that maintaining an inquiring mind can make us happier and even prolong our lives. Just as well the Festival of Curiosity starts in Dublin on July 25th, then 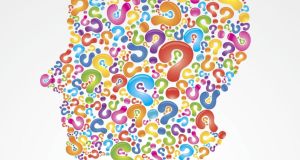 “If you look at people’s achievements in life, intelligence plays a part and perseverance plays a part, but the third factor is intellectual curiosity,” says Ian Robertson, professor of psychology in Trinity College Dublin

‘We want to encourage people to have the confidence and courage and opportunity to be curious,” says Ellen Byrne, creative director of Dublin’s Festival of Curiosity, which begins on Thursday.

“We want to encourage people to ask questions and also to feel okay about saying ‘I don’t know’. If your son or daughter asks you ‘Why is the sky blue?’ how do you answer that? Do you make up a funny story or say ‘why does that matter?’ We wanted to allow parents to say ‘I don’t know’ but then have the confidence to actually go and find out how something works. I think it’s absolutely essential that we create an environment where people can ask questions and want to ask questions.”

Once upon a time this sort of thinking could get you burned at the stake. “Nowadays we see curiosity as a good thing,” says Philip Ball, author of Curiosity: How Science Became Interested in Everything.

“In ancient Greece, curiosity referred to finding out stuff you didn’t need to know, or perhaps shouldn’t know. It meant prying into things that didn’t concern you. A curious person was a busybody.”

Religious influence
Things got even worse for the curious in the Middle Ages under Christianity. “Curiosity meant you were going beyond what God had ordained we were supposed to know,” says Ball. “There are plenty of warnings in the Bible about how too much knowledge was a dangerous thing. In medieval times, society was very strongly hierarchical and there was the notion that there were hierarchies of knowledge that had to be respected. The ordinary person shouldn’t know too much. The priests and the rulers should know more, but no one should aspire to know as much as God knew.”

The notion of curiosity we have today, developed between the Renaissance and the Enlightenment. “In the 17th century there was suddenly this idea that we were created to aspire and that it wasn’t a bad thing to want to improve ourselves and know about the world,” says Ball.

“[Before that], putting it simplistically, you became a scholar by learning what the ancient writers had said rather than by thinking for yourself. The Renaissance permitted a new kind of curiosity that involved going out in the world and looking at stuff . . . An experiential approach to knowledge. You could learn by direct interaction with the things you were interested in, and the great scholars or scientists of the 17th century, people like Christopher Wren, were interested in everything. There was no clear demarcation between disciplines . . . Pretty much any question became permissible. Not just the big obvious questions like ‘why do we become sick?’ or ‘how do the stars move around?’ but also ‘what does a gnat’s leg look like?’ The most obscure phenomena were being followed up.”

Deadening factors
Of course, this era of curious amateurs and polymaths was limited to a small cadre of rich European men. But nowadays, while theoretically more of us are free to pursue our interests, in reality, goal-based education systems, a hyper-specialised employment environment and a passive entertainment culture can lead to a deadening of our curiosity.

Niamh Shaw, one of the Festival of Curiosity’s artists-in-residence has been involved in a project where she’s been asking people questions about their own curiosity. “Some people told us they weren’t curious about anything,” she says. “I felt really sorry for them. I think some people lose their curiosity along the way, maybe because they had a bad relationship with school and associate learning with something negative, but I think deep down it’s there in everybody.”

Ellen Byrne feels that the modern education system can discourage curiosity for curiosity’s sake. “At the moment rote-learning is very much what our curriculum is based on. I meet primary school children who are very curious but then you get to secondary school and you can see how curiosity is sometimes drained out of people . . . If we can foster a culture of curiosity I think people would become better thinkers and better innovators. We would all lead happier lives if we were all curious.”

Living longer
Research also suggests that being curious would make us more successful and could make us live longer. “If you look at people’s achievements in life, intelligence plays a part and perseverance plays a part, but the third factor is intellectual curiosity,” says Ian Robertson, professor of psychology in Trinity College.

“Intellectually curious people tend to achieve more in life. And more importantly they live longer. We don’t know why they live longer, but I recently wrote a research paper putting forward a hypothesis that giving the brain little infusions of noradrenaline has protective effects on the brain’s structure. Curiosity gives your brain repeated infusions of noradrenaline. In moderate doses it freshens up the brain and fosters plasticity in the brain.”

So why are some people more curious than others? “I don’t know of any evidence that curiosity is innate,” says Robertson. “It’s almost certainly something you learn from parents or teachers or other people in your life. It’s a skill. It’s about looking at the world with fresh eyes. Children are naturally curious. If you are only goal-driven you can snuff out that curiosity. But you only have to see a young child and see how they are delighted by new things to see that we all start out curious. We just need to retain that.”

The Festival of Curiosity takes place in Dublin from tomorrow until Sunday, festivalofcuriosity.ie

Turn off that TV. . . And other ways to remain inquisitive

1 Engage with the world around you, says Ellen Byrne. “If something breaks do you try to fix it? Do you have a look at it or do you just throw it in the bin? Do you try to figure out how things work or even try and Google it? I think curiosity can make people more self-sufficient and the more people do it the more confident they become at life in general.”

2 Be playful, says Niamh Shaw. “Find some activity, whether it’s taking a class in improvisation or climbing trees or jumping or making sandcastles – something that awakens your sense of play. That sense of play will open up your wonder and curiosity.”

3 Don’t watch too much television. “There’s a problem with being passively stimulated in the way that television does,” says Ian Robertson. “It doesn’t engage those parts of the brain that are to do with internally driven attention. Watching television over long periods has a tendency to ramp down our capacity for curiosity.”

4 Remember: curiosity is a privilege. “There are some areas of the world where it’s still dangerous to be curious,” says Philip Ball.

5 Know that there are no stupid questions. “If you live on this world or live on this planet then you have the right to ask a question and be curious,” says Ellen Byrne. “If something does pique your curiosity, have the confidence to find out more. There are no stupid questions. It’s okay to say ‘I don’t know’ and it’s okay to ask any question you want.”

Keeping curious kids busy: Summer events for the inquisitive
On the Hunt Wear out some shoe leather in Dublin this weekend and go on a free treasure hunt. The trail starts at Dublin City Hall and encourages treasure hunters to solve puzzles and riddles along the way. The hunt runs on Saturday and Sunday between 10am and 4pm. Pre-book online at festivalofcuriosity.ie for a family pack.

Hands-on science Ever wanted to inflate a balloon with vinegar and baking soda? Or build an artificial hand? Or grow crystals? Anyone4Science is running camps at various locations in Ireland this summer for children, grouped into suitable activities for pico-scientists (age 4-6), nano-scientists (age 7-9) and micro-scientists (age 10-12). anyone4science.com

Rock On Check out two 90-minute guided walking tours starting from Smock Alley this weekend. Dublin Rocks, which starts at 3pm on Saturday, will have you looking from cobblestones to chimney pots for curiosities, including a coral reef. For ages 10 and above.

Look and make Illusion, the brain-scrambling new exhibition at the Science Gallery in Trinity College Dublin, includes curiosities such as a screen of “bugs” that crawl onto your hand and a revolving wheel that tricks your eyes into making faces swirl. sciencegallery.com

The Final Frontier CIT Blackrock Castle Observatory in Cork is a magnet for curious minds, and one of the newest additions is a Junior Space Camp for kids aged 5-7 on August 2nd and 16th from 2pm to 3.30pm. bco.ie

A stunning salmon and prawn tart to celebrate Irish seafood
7