Coping: Yorkshire pudding as a metaphor for disgruntlement

Are all those philosophers right that romantic love is doomed? 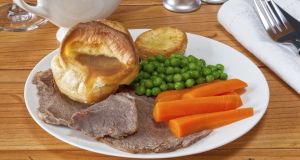 We said that we would go for a roast last Sunday, but we had a fight instead. He is English, you see, and he insists on Yorkshire puddings. Trying to find somewhere in Dublin that does a good roast with Yorkshire puddings is not easy. A roast just isn’t the same without them. I called around; “Does your roast have Yorkshire puddings?” I asked confidently, as though the mere belief would make them manifest. No joy.

The fight was not caused by the lack of puddings, but it didn’t help. By that evening, I was sitting on the bed in my oversized “Don’t blame me, I voted for Romney” T-shirt (an ironic gift), pondering why it is that we get into relationships.

I mean that coolly. I was thinking it not in the aftershock of crackling anger that comes after a mighty disagreement with your partner, but just in general, and with the curiosity you have when you encounter a relatively familiar concept from a new angle, like watching a friend order a salad at Eddie Rockets. It’s anthropologically interesting.

We think of a good relationship as improving us, and it does. But it also shines a spotlight on the sides of your character that you would rather stuff, unfolded and smelling faintly of mildew, into a drawer.

I am a reasonable person. I very rarely lose my temper or raise my voice. The idea that a Yorkshire pudding-related disagreement with a grown man could result in my getting frustrated enough to shout is, let’s face it, pathetic.

It wasn’t just about the puddings. They are just a fluffy, delicious, golden metaphor for other disgruntlements. He was disappointed by the absence of puddings; I was annoyed by the lack of acknowledgement of all the pudding-related research I had done. It ended with me shouting something along the lines of, “And we couldn’t even make any anyway, because the pudding tin is at my brother’s!”

If I were single, I thought, sitting on the bed, no one would ever see that deeply unflattering side of my character, and I would have a far easier time denying it even existed.

We start relationships with people primarily because they fulfil a need in us; a need to be loved, or for something else. That first flush of obsession is based around total elation that someone you think is wonderful sees you; that they value what you think.

We stay in relationships because we benefit from a person being in our lives. Hopefully, they make us happy and we develop into better people as a result of knowing them. And, in a good relationship, we do the same for the other person, but this further feeds our own happiness, so it is hardly selfless.

All of this is true, but as I sat on the bed on Sunday I couldn’t help but think of all the philosophers who have said that love – at least romantic love – is doomed as an enterprise.

Kierkegaard was perhaps the most miserable, which is why I was drawn to him that night. Like a lot of western philosophers of his time (and for a significant time after him), he was wildly pessimistic about love.

Generally considered the first existentialist, he put forward a theory that we are, as beings in the world, supremely alone inside our own skins, that passion and long-term relationships are incompatible and that love of God is fundamentally superior to any human attachment. Well it would be, wouldn’t it? It is an unfair competition. It is easier to be loving and patient with someone who can never be accused of forgetting to take the bin out. Jesus is not going to refuse to go with you to your office Christmas drinks.

“But they said to bring partners!”

“I don’t care. Janet from marketing always shows me pictures of her kids all night. I’m not going this year.”

Kierkegaard was right: we will never be supremely, perfectly happy or entirely understood in every way by our partners. But being unable to find sublime perfection is not a good reason to traverse the world without your best friend. Forget about the Yorkshire puddings, and love each other.

The secrets to growing an exotic Irish garden
6