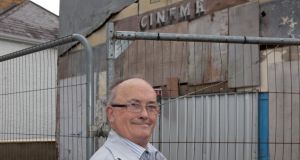 Tommy Maguire, who has died aged 75, was a Tyrone man who contributed a new genre to film. As Italian director Sergio Leone invented the Spaghetti Western, Maguire was the originator of the Spud Western.

He made Gunhawks in 1974, using a cine camera. Return of the Gunhawks came nearly 40 years later and was the subject of a TG4 documentary, An Cowboy Deireannach.

Maguire also raised large sums for charity, for which he was awarded an MBE. During the Troubles, Castlederg was one of the North’s most divided towns but Maguire transcended this division and was accepted across the community. In a citation accompanying an award he received it was said he had “a magical touch which allows him to reach out and touch the hearts of all people, regardless of class, creed or religion”.

Tommy Maguire was born a few miles outside Castlederg, the youngest of five children of Tommy Maguire, a mill-worker, and Sarah (née McCarron). He attended Drumnabey Primary School, then Strabane Technical College. Later he worked in a woollen mill and then as a cinema manager.

He was a colourful character. He once headed out in his car to Killeter Fair in full drag. Police stopped him and told him they had received a report that “a strange woman had broken into Tommy Maguire’s car”.

He is survived by his widow, Eileen, daughters Glenda and Aileen, sister Molly and grandchildren.