Character actor with impressive body of work including role in Aliens 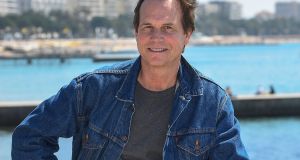 Bill Paxton, who has died aged 61 from complications following surgery, was a lively and endearing character actor. With a knack for conveying bareknuckle vitality as well as a more considered intelligence and tenderness, he cropped up initially in some of the sparkiest pulp films of the 1980s, including Kathryn Bigelow’s highly original vampire movie Near Dark (1987).

After James Cameron had an unexpected hit with The Terminator (1984), in which Paxton appeared briefly as a blue-haired thug, he took the actor with him on to future projects, casting him as one of a band of rough and ready deep-space marines in Aliens (1986), as a dopey car salesman in True Lies (1994) and as a treasure hunter in the framing story that bookends Titanic (1997). As one of the beleaguered astronauts in Apollo 13 (1995) and the chief tornado-chaser in Twister (1996), Paxton was for a time Hollywood’s favourite down to earth good ol’ boy.

Such parts would on their own have been enough for a career. However, Paxton landed several demanding lead roles – two of them in emotionally weighty thrillers, the other in an offbeat television series – which proved not only that he was capable of bringing subtle shadings to trickier material, but also that the industry had been remiss in not putting more of that sort of work his way.

In Carl Franklin’s One False Move (1992), he was Dale “Hurricane” Dixon, a goofy, garrulous Star City sheriff whose fate is inextricably linked to the vicious killers heading his way. For all that film’s suspense, it had a gentle side personified by Paxton, who played with delicacy several pointedly crushing scenes, such as the moment when Dale overhears the visiting LAPD detectives discussing what they really think of him.

It was a joy to see the subtleties of anguish, guilt and resentment played out in Paxton’s clenched performance

Even better was Sam Raimi’s A Simple Plan (1998), in which he played an ordinary Joe who stumbles upon $4 million in a small plane crashed in the woods, only for the loot to have a pernicious effect on his life. It was a joy to see the subtleties of anguish, guilt and resentment played out in Paxton’s clenched performance as a man haunted by the suspicion that he has been dealt a rum hand.

In the HBO series Big Love (2006-11), he was Bill Henrickson, another character who feels he should be enjoying life far more than he is. As a polygamist in a fundamentalist Mormon community in Utah, he spends most of his time refereeing between his three wives, his parents and the town elders.

Born in Fort Worth, Texas, Bill was the son of Mary Lou (nee Gray), a fashion director, and John Paxton, a lumber salesman who later followed his son into the acting business. (Paxton Sr had roles in six of Raimi’s films, including A Simple Plan and the Spider-Man trilogy.) Bill’s earliest brush with fame arrived when he was eight years old and was hoisted above the crowd outside John F Kennedy’s hotel only a few hours before the president was assassinated; a photograph of the moment is on display in the Sixth Floor Museum at Dealey Plaza, Texas.

As a teenager, Paxton became interested in film-making when he and his friends began shooting Super 8 shorts for which they built their own sets. He moved to Los Angeles and found work in various prop and art departments. He was hired by Cameron, who was then a production designer and second-unit director, on the no-budget horror Galaxy of Terror (1981). Together they created the interiors of spaceships out of everything from Winnebago parts to dishwasher racks.

He had more chance to shine in Aliens as the comically macho Hudson. “Being the hysteric of the group, I was always yelling and screaming,” he recalled.

When Paxton was rejected by film schools in southern California, he moved into acting; he had a walk-on part as a soldier in the Bill Murray hit Stripes (1981) and played a flat-topped bully in the bawdy comedy Weird Science (1985). He had more chance to shine in Aliens as the comically macho Hudson. “Being the hysteric of the group, I was always yelling and screaming,” he recalled. “I was worried the audience would think, ‘Oh God, when is this guy going to get killed?’” In fact, his character was a crowd-pleaser.

“He was the most relatable to audiences because he was deathly afraid, as most of us would be. I mean, for every Ripley [the hero, played by Sigourney Weaver], there are a million Hudsons.”

Never got his due

Subsequent film work included another horror sequel, Predator 2 (1990), the western Tombstone (1993), the black comedy The Last Supper (1995), the Terms of Endearment sequel The Evening Star (1996) and the enjoyable mountaineering adventure Vertical Limit (2000). But even after receiving acclaim for A Simple Plan, Paxton never really got his due as an actor. “I thought that one might be the role that put it all together for me, that connected the dots,” he lamented in 2002 .

He made good on his directing ambitions with Frailty (2001), in which he also starred as a man who entreats his sons to join him in following God’s orders by murdering demons in human form. This disturbing film about religious fanaticism, adroitly handled by Paxton, was sadly overlooked, and he directed only one more, the golfing drama The Greatest Game Ever Played (2005).

In recent years, he enjoyed success on television in the historical miniseries Hatfields & McCoys (2012) and the Marvel adventure Agents of S.H.I.E.L.D, while returning to supporting roles in films such as the Tom Cruise action fantasy Edge of Tomorrow and the drama Nightcrawler (all 2014).

Paxton’s first marriage, to Kelly Rowan, ended in divorce. In 1987 he married Louise Newbury: she survives him, along with their children, James, who is also an actor, and Lydia.