Broadside: What a state that women have been written out of Irish theatre

Emer O’Toole: If a nation’s canon is almost exclusively dominated by white male voices, what does that tell you about that nation? 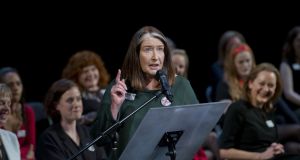 ‘We spent two classes puzzling out how it could be that work as vital as Charabanc’s is neglected.’ Above, Eleanor Methven, cofounder of Charabanc, speaking at the Abbey. Photograph: Brenda Fitzsimons

Sometimes life imitates art. Recently, however, life has been imitating my teaching curriculums. For example, in early 2014, just as I was revving up to teach a module on gender and performance in contemporary Ireland, RTÉ paid out €80,000 over homophobia allegations, and Pantigate swung into gear. As my class and I watched the video of Panti Bliss’s now famous oration from the Abbey stage – an address Fintan O’Toole (no relation) declared “the most eloquent Irish speech since Daniel O’Connell was in his prime” – I knew I could have provided no more perfect example of the political potential of gender performance if O’Connell himself had returned from the grave and burst into I Will Survive.

So when Waking the Feminists coincided with a module this year on women’s exclusion from the Irish canon, I began to think that my course outlines might actually be clairvoyant. You know, like that octopus that tells the football results, except with added nonsense from our national cultural institutions.

I teach a loosely chronological theatre history class, anchored around canonical playwrights and dramatic movements. Friel and Field Day take centre stage in the 1980s. Field Day consciously framed their work as postcolonial, aiming to create a cultural space where artists could account for the legacies of British imperialism and articulate modern Irish identities. But there were no women on the Field Day board, and when the Field Day Anthology of Irish Writing was published in 1990 – a 4,000 page, three-volume undertaking, designed to galvanise an Irish literary canon – you had to go looking for women with a microscope.

The resulting feminist ire was rewarded with the fourth and fifth Field Day volumes, on Irish women’s writing and traditions. While these are an extraordinary achievement, the gender segregation remains maddening, as does the fact that Ireland continued to ignore women’s work.

Next on the syllabus is Charabanc Theatre Company, a group of five Belfast women, who, in 1983, teamed up to create juicy roles for themselves and in the process made accidentally political theatre. They recovered women’s histories and dealt with sectarianism, sexism, and class, performing riotously funny plays about women in a war zone. Yet Charabanc went all but unnoticed by the postcolonial project and was ignored by many historians and scholars of Irish theatre.

When Charabanc and Waking the Feminists collided, we spent two classes puzzling out how it could be that work as vital as Charabanc’s is neglected; how it could be that, 25 years after Field Day exiled women from its imagined nation, the Abbey saw no problem with doing the same. We debated feminist strategy. We argued over quotas. And, at the end of it all, I asked the students to take 10 minutes to answer the following question: if a nation’s canon is almost exclusively dominated by white male voices, what does that tell you about that nation? I’ll leave you with some of their thoughts: