Broadside: Game of Thrones is not all swords and misogyny – here be feminism too

The show is far more feminist than it initially appears 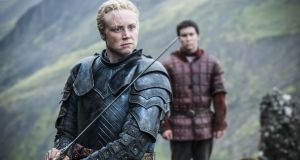 Last night, the first episode of series six of Game of Thrones aired in the US (and here this morning at 2am on Sky Atlantic for diehard fans). The series returns to its prime-time slot on the channel this evening, but at the time of going to press, no preview had been made available to journalists. In fact, there has been no preview at all, with HBO keeping the much- anticipated season premiere of its biggest show entirely under wraps.

For the first time, Game of Thrones has caught up with the books it is based on, so nobody knows what’s going to happen. Therefore, I don’t know yet if the opener redeemed what many thought was an entire preceding season of misogyny and mistreatment of women.

However despite the criticisms levelled at season five, of which many were fair, I’m of the opinion that the show is far more feminist than it initially appears.

Having been described recently by new cast member Ian McShane as “just tits and dragons”, it might be surprising that the show has such a strong female following.

Extremely violent and featuring lots of sex, nudity and of course, dragons, one might think that Game of Thrones is a show designed to titillate and delight males – and of course, it does. But thanks to a host of strong female characters who are powerful both directly and indirectly and who assert control over their own destinies in the face of medieval misogyny, the show has long been appealing to feminists.

However, season five did alienate a large portion of the feminist fan base. There were definitely far more female characters than male being raped, attacked and humiliated. Young Sansa Stark was brutalised by her new husband on their wedding night. Shireen was burned at the stake by her father, Cersei was raped by the brother with whom she had previously enjoyed an incestuous relationship and Gilly was attacked at the Wall, only to be saved by bumbling Sam (and a direwolf).

After Sansa’s rape, many high- profile fans swore off the series, and others were disgusted that Cersei’s rape was in fact consensual sex in the book on which the series is based by George RR Martin.

But sexual violence against women has always been a component of the show, dating back to the second episode, when Daenerys is given to Khal Drogo and taken by him, frightened and crying, on their wedding night. What was remarkable about that, however, is that the series then showed Daenerys discovering a powerful sexual attraction for her husband, harnessing it and enjoying love and passion in a relationship that was initially based on fear and dominance.

In the Game of Thrones world, it’s entirely believable that many men rape and pillage with little care for their victims, but it’s also believable that the women are capable of fighting back, because these gals are no shrinking violets.

Daenerys is the Mother of Dragons, a queen with a loyal following who rules fairly, has casual sex and aspires to be the ruler of the Iron Throne. Brienne is a knight who can fight any man, and win. Arya Stark is a teenager who killed a grown man for raping children and has always been audacious, independent and scrappy.

Even her sister Sansa, admittedly a character who has had a very bad run of things at the hands of men, was making a break for freedom when we last saw her. She jumped from the wall to an uncertain future, propelled by revenge and a desire to just do her own damn thing for once.

Women are badly treated on the show, no doubt about it, but rarely does it break them. They are victims, but so are many of the men. In fact, at this point in the series, most of the men are dead – and the ones who aren’t are in dire straits.

Then there are the manipulators – the cunning Tyrell women who use sexuality, murder and deceit to fuel their ambition, sly Ellaria and her Sand Snakes who exact revenge with deadly kisses and impressive physicality, and of course Cersei Lannister, the woman whose ruthless ambition makes her an even more sinister version of Lady Macbeth.

In last season’s finale, Cersei finally met her match in the form of the High Sparrow, who orders her hair shorn and for her to do a literal walk of shame through the city for the crime of adultery. She has committed treason and regicide, borne children of her brother and is one of the show’s most reviled characters, but this scene was undoubtedly designed to make the viewer finally feel sorry for her.

The fact that she’s naked isn’t designed to titillate the audience, but to punish a dastardly character in a way that’s more visceral than violent. We’re acclimatised to eyeball-popping and slit throats; what happened to Cersei was perhaps a fate worse than death. However, it would be unwise to expect her character to remain cowed for long.

In Game of Thrones, there is a patriarchy at work without a doubt, but it’s the women and children who now drive the plot, and who pose the greatest threat to the status quo.

If exercise came in the form of pills, we’d be queueing up for them
5

A new way to make fishcakes that is quick, easy and delicious
9