‘Break-up and heartache is the worst pain you go through’ 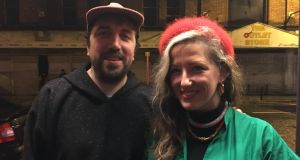 What subject do you wish you had studied more in school?

Sally: I’d like to have taken another language. I did my Leaving Cert on tape, I smashed my hand the week before at our graduation party in the local pub – The Roundabout in Artane. I had a fiver in my hand, ordered a pint of cider, and the bouncer lifted a marble top and caught my hands in it. Smashed my fingers.

David: I wish I studied music more, classically. Maths was my forte in school. Maths was great because you could do it while listening to music. It had this rhythm to it.

Do you have any particular motto or mantra when you’re going through a tough time?

Sally: Lately I’ve been saying “this too will pass”, that things are just momentary and you’ll be okay again. But mantras and mottos are a bit dickish aren’t they?

David: Well, it’s easier to give advice to other people than it is to yourself. For me there’s only really reflective mottos, the kind of “if it doesn’t kill you it makes you stronger” kind of stuff, which I do feel is true. I tend to just let time do its job. Let go.

What would be your death row meal?

David: Spaghetti alle vongole with a glass of white wine.

Sally: That’s a good choice. I feel like nostalgia would seep in for death row, though, so I’d probably go for my granddad’s coddle. Make it extra salty by crying into it.

Sally: You’d have to.

David: Although that would make me too emotional, so nonchalant Italian food.

David: I get emotional watching some guy I have no background on, he could be a Waterford hurler who has just won or lost a match and talking to some guy on “The Sunday Game”, and I just find myself welling up. The last time I welled up was last weekend watching Levon Helm singing “The Night They Drove Old Dixie Down” – they were showing The Band’s The Last Waltz in the Sugar Club. It’s just one of those things that have so many connections; family, friends, with Levon himself.

Sally: I never stop crying. I’d be set off fairly easily. I’d prefer to be that way than as blocked as some people are.

Is there any particular artist you feel very connected to right now?

Sally: I’ve recently fallen back in love with David Byrne. When I was a kid, there was a big mirror on our landing, and I used to put my dad’s suit on and dance to Talking Heads. When I heard Talking Heads as a kid, for some reason in my head I thought “oh brilliant, a band for children”. I connected with it so much I thought it was aimed at me. Now he does these hour-long talks called Reasons To Be Cheerful. They’re on YouTube and they’re gorgeous.

David: Laurie Anderson is someone who even with the loss of her husband and her dog managed to make art out of it that was really a celebration of love. We’re talking about people who can use any inspiration and channel it into love and positivity.

Sally: I have a weird thing about whales. I’m fascinated by them but terrified by them as well. As a pet, dogs are sound, cats are jerks.

David: If I was to envy the life of another animal, it would be some bird on the south coast of Australia. Lorikeets. They make an awful squawking sound, but they have amazing multi-coloured, day-glo, ravey Sally Foran outfits.

Sally: Australia is mad. Everything is familiar because it’s like you’re in England, but then there’s s*** that will kill you in the grass.

David: But yet all your friends are still alive.

What’s your favourite item of clothing that you own?

Sally: I’ve a couple of dresses I’d run back into a burning building for. Anything in the embroidery section of my wardrobe.

Sally: I don’t think I’m ever happier than when I’m in the west of Ireland or south of France. Inis Oirr is a very special place to me. I go to Nice a bit. There’s something about being close to that intense blueness of the sea.

David: West of Ireland for me too. And Cadaqués is a place I’m very fond of. New York as well.

When in your life were you in the most physical pain?

David: I had a bad fall jogging recently. Fractured my hand, knee is f***ed, shoulder, face. Hitting your head is the scariest part, the concussion and whiplash.

Sally: I think, genuinely, break-up and heartache is the worst pain you go through.

What do you owe to your parents?

David: We both come from buzzers. People are shocked my parents are my parents because they’re so youthful.

What good book did you read recently?

David: “Beatlebone” by Kevin Barry is my favourite book of his. The greatest luxury for me is being able to read a book. I used to chomp through books.

What tune would you always play at a party?

David: My big one which has outlasted all the others and I still love it is “Say A Little Prayer”, Aretha Franklin.

Sally: Sébastian Tellier’s ‘La Ritournelle’. I remember the summer that came out.

Sally: That brings me right back to that summer.