Bláthnaid talks to Róisín about urinary incontinence, a common problem for women 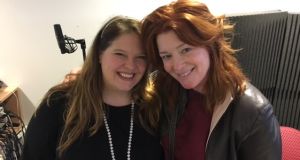 Róisín Meets Bláthnaid Ní Chofaigh: The broadcaster recently spoke about the experience on radio and received an “avalanche of feedback” from women of all ages. Photograph: The Irish Times

“I thought, ‘This is what I have to live with, this is what happens when you have big babies.’ ”

This week on the Róisín Meets podcast, broadcaster Bláthnaid Ní Chofaigh sat down with Roísín Ingle to talk about something many women suffer from, often in silence: urinary incontinence.

“I would have always had a change of underwear in my bag. I didn’t do any exercise after morning time because I couldn’t. If I walked the dog after 11, after the coffee, I would be wet coming back. I would wear a pad all the time,” she says .

After mentioning it to her doctor, she realised a simple procedure could change her life.

Ní Chofaigh recently spoke about the experience on radio and received an “avalanche of feedback” from women of all ages.

The native Irish speaker, who is presenting a new programme on Raidió na Gaeltachta, also spoke about her father’s death from diabetes seven years ago.

“You owe it to your family to keep yourself alive . . . I think he would have got 10 more years out of it if he had minded himself. And that annoys me,” she says.

The broadcaster, who has been working in RTÉ since she was a teenager, is now in her 40s and has taken up a new challenge. She started college for the first time the same week as her teenage daughter.

To listen to the conversation or other episodes of the podcast, go to Soundcloud, iTunes, Stitcher or irishtimes.com.

Coronavirus: How to keep children happy, learning and entertained at home
2

‘Canada is now my home, and the home of my 12 children’
Real news has value SUBSCRIBE