The comedian says showbusiness is a ‘lonely life’ 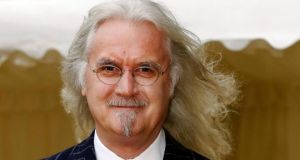 Billy Connolly: ‘In my quieter moments I do sometimes think I could have done more (to help Robin Williams).’ Photograph: Luke MacGregor/PA

Comedy star Billy Connolly has said he “could have done more” to help tragic actor Robin Williams, who was found hanged last month.

The Scottish stand-up favourite, known as the Big Yin, said Williams was “a joy to be around”.

Father-of three Williams (63), was discovered unconscious by his personal assistant in August at his home in Tiburon, in the San Francisco Bay area.

But Connolly, who like Williams has battled Parkinson’s disease, told the Mail on Sunday’s Event magazine: “In my quieter moments I do sometimes think I could have done more (to help him).

“It’s a lonely life, showbusiness. You spend a lot of time on your own, and if you dwell on these things you can hurt yourself, as Robin proved.”

Last month Connolly’s wife Pamela Stephenson said her husband may have been suffering with Parkinson’s for a decade before his condition was known.

She told the Radio Times: ”He’s probably had it for 10 years, so it’s very, very slowly progressing ... There are different strains of Parkinson’s that I’m learning about.

”I’ve actually noticed his hand shaking for many, many years ... I used to think he was playing the banjo a bit too much ... I think it’s been there for a long time.”

Connolly, who has been given the all-clear following treatment for prostate cancer, has previously described how he received the news that he had cancer and Parkinson’s disease on the same day.

Asked for his views on Scottish independence by the Mail on Sunday, Connolly said he no longer lived in the country so he does not have the opportunity — or enthusiasm — to vote.

Shame-free sex education: It’s So Amazing! And only a little bit mortifying
6

Expert tips: A dentist on toothcare
9