As 500,000 people around Ireland help to clean up their neighbourhoods, An Taisce’s director of education talks about boosting the nation’s environmental awareness 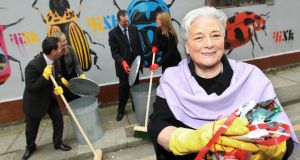 On patrol: Patricia Oliver, who has also been responsible for setting up the Blue Flag programme for beaches

There’s far less litter around than there used to be, according to Patricia Oliver of An Taisce. Part of that is down to the National Spring Clean, which she co-ordinates. The initiative brings 500,000 volunteers on to the streets of their neighbourhoods to pick up litter in organised clean-ups each April. “It’s about behavioural change. We had an average cleanliness rate of 47 per cent in our baseline study, and now it’s at 82 per cent,” Oliver says.

An Taisce has added a new dimension to the programme this year, to acknowledge that not everyone has had time to join in so far. “We have introduced #2MinuteStreetClean, asking people to do a two-minute clean-up on the beach, in the park or on the street outside their house – and share their photo on social media,” she says.

Another factor in our improving approach to our local environment has been the Irish Business Against Litter campaign, according to Oliver. “There’s nothing like a town to be seen as a litter black spot to encourage improvement,” she says. “It has acted as a provocation to local authorities, who have stepped up.”

Oliver is optimistic about young people’s environmental awareness but disappointed by the lack of progress at governmental level. “Environmental organisations have failed to make governments move in time. I think our young people are far more clued in to environmental issues. They bring it with them all the way through from primary school – but they have more problems to face in terms of climate change.”

Oliver retires next month after working with An Taisce for more than 40 years, 20 of them as its director of education. She has also been responsible for setting up the Blue Flag and Green Schools programmes, one recent addition to which has been the Green Campus programme, which brings hundreds of students out for clean-ups.

“It started with a student at University College Cork who had been on the Green Schools committee in primary and secondary school and asked us why her university didn’t have a Green Flag.”

In another sign of broadening environmental awareness, Cork University Hospital has just become the first hospital in the world to be awarded a Green Flag for environmental initiatives.

What does Oliver think her biggest legacy will be? “The thing that gives me the most satisfaction is the creation of 63 jobs in the environmental-education unit,” she says. “We have 20 in Dublin and the rest working around the country.”

You can still register to take part this month, at nationalspringclean.org

‘I couldn’t afford to live in Dublin, the city of my birth’
Real news has value SUBSCRIBE