At a Dáil vigil this week, people with disabilities – more than one in seven of Ireland’s population – protested against cuts that stop them living independently

A number of disability organisations are taking part in a day and night vigil outside government buildings. They hope to persuade Ireland to sign the UN convention on the Rights of Persons with disabilities while highlighting other issues. 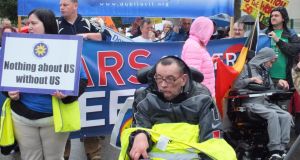 Michael McCabe: “Some people can’t even be at this protest because they don’t have transport or assistance to get here. So I’m protesting on their behalf too.” Photograph: Nina Byrne/Centre for Independent Living

Michael McCabe is one of the 20 or so people with disabilities who, joined by supporters, camped outside the Dáil over three days this week.

They staged the vigil, which started on Tuesday, to highlight the cutbacks to disability supports and personal-assistant hours for people with disabilities who live in the community.

“People with disabilities didn’t have a boom, but we were hit in a number of ways by cuts, and then there are all these new taxes,” says McCabe, a married homeowner with a mortgage who manages the Centre for Independent Living in Blanchardstown, in west Dublin.

About 20 such centres provide house and garden maintenance, transport, advocacy and information for people with disabilities who otherwise live independently.

Their funding has been cut by 14 per cent in the past two years, according to Gary Lee of Centres for Independent Living, and since 2008 an estimated €160 million has been cut from services to the 600,000 people in Ireland with disabilities – about 13 per cent of the population – and their families.

“Most people don’t realise that there are higher costs associated with disability in terms of heating your home and the use of aids and appliances,” says McCabe, a wheelchair user with cerebral palsy; his personal assistant also acts as his interpreter. “Some people can’t even be at this protest because they don’t have transport or personal assistance to get here,” he says. “So I’m protesting on their behalf too.”

During the protest the Government announced a €450 million capital-investment plan to refurbish nursing homes and residential units for people with disabilities. The protesters told Taoiseach Enda Kenny that this goes against the grain of living independently or in small community houses. They have called for €300 million towards direct payments, self-directed living supports, and personal assistants.

Martin Naughton, one of McCabe’s fellow activists, says, “The worst part of having a disability is not being unable to walk again. The worst part, for many people, is being consigned to a nursing home or an institution. This is highly unfair and wrong. We want investment in people.”

After talking to protesters outside the Dáil, Kenny met them again on Wednesday evening. McCabe says, “The Taoiseach committed to looking at drafting a personal assistance service Bill” – to legally protect assistants – “to reintroduce the suspended mobility allowance for people with disabilities, and to enact the assisted decision-making legislation. These are achievements.”