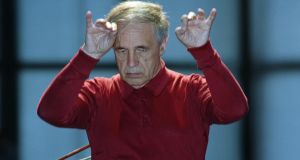 The French composer and conductor Pierre Boulez, who has died aged 90, was a dominant figure in classical music for more than half a century.

Boulez belonged to an extraordinary generation of European composers who came to the forefront during the decade or so after the second World War. They wanted to change music radically, and Boulez took a leading role. His Marteau Sans Maître (Hammer Without a Master) was one of this group’s first major achievements, and it remains a central work of modern music.

Boulez reached his peak as a conductor in the 1960s, when he began to appear with some of the world’s great orchestras, including the Concertgebouw in Amsterdam, the Berlin Philharmonic and the Cleveland Orchestra. His style was unique. He never used the baton, but manipulated the orchestra using his two hands simultaneously, the left indicating phrasing or, in much contemporary music, counterrhythm.

His characteristic sound depended on his famously acute ear and suited his core repertoire: Stravinsky (several of whose works he introduced to Europe), Debussy, Webern, Bartok and Messiaen.

As a young composer, he matched intelligence with force of mind: he knew what had to be done, according to his reading of history, and he did it, in defiance of all the norms of French musical culture.

His destination was Paris, where President Georges Pompidou had agreed to found a contemporary music centre for him in the capital: the Institute for the Research and Coordination of Acoustics and Music, known as IRCAM. It had its own 31-piece orchestra, the Ensemble Intercontemporain. In the 1980s, he gained further government support for his grandest project, the City of Music complex in the Villette district of Paris, housing the Paris Conservatoire, a concert hall and an instrument museum.

Pierre Boulez (the “z” is pronounced) was born in 1925 in Montbrison, a town near Lyon, the son of an industrialist, Léon Boulez, and the former Marcelle Calabre.

He studied piano and began to compose in his teens. Against the wishes of his father, who wanted him to study engineering, he went to Paris in 1942 and enrolled at the conservatoire.

In 1944 and 1945, he took a harmony class taught by Olivier Messiaen, whose impact on him was decisive. Messiaen’s teaching went far beyond traditional harmony to embrace new music that was outlawed both by the conservatoire and by the German occupying forces: the music of Schoenberg, Stravinsky, Bartok and Webern. Messiaen also introduced students to medieval music and Asian and American music.

“It was a revelation,” he said, “a music for our time, a language with unlimited possibilities ... Music moved out of the world of Newton and into the world of Einstein.”

A musical work should be, Boulez believed, a labyrinth, with no fixed route or certain ending. His appointment to the New York Philharmonic presented great challenges.

Both his programming and his handling of an older repertoire met with some resistance from audiences, critics and, it was said, even some of his musicians.

After his years with the Philharrmonic Boulez’s priority was his Paris research institute, and he severely reduced his conducting commitments.

In the early 1990s, he produced the greatest of his late works, a new version of explosante-fixe, first conceived as a memorial to Stravinsky. He also began in his later years to appear more widely again as a conductor, with orchestras in the United States and Europe.

Boulez remained tightly guarded about his private life. It was known that his older sister, Jeanne, was important to him; few others were able to break through his reserve.

The achievements embodied in his published works and recordings are formidable, and his influence was incalculable.

The tasks he took on were heroic: to continue the great adventure of musical modernism, and to carry with him the great musical institutions and the widest possible audience.

Make a move to Rialto: Dublin 8, but without the wave of gentrification
10