Architect who made building conservation his life’s work 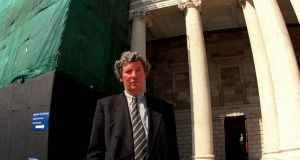 David Slattery outside the Bank of Ireland, College Green, in 1996. When asked what he had used as a gentle abrasive to clean the bank’s stonework, he remarked, “crushed angels’ teeth.” Photograph: David Sleator

While the term pioneer and David Slattery might stand in contradistinction in some contexts, in the field of building conservation the Dublin architect could justifiably claim to have blazed quite a trail.

The gregarious, witty, story-telling architect with boyish charm and a mischievous glint in the eyes is finally at rest. The one-time architect for St Patrick’s Cathedral was also the “Surveyor of the Fabric” of the front bar in Doheny and Nesbitt’s. When asked at a London conference what he had used as a gentle abrasive to clean the now-bright stonework of the Bank or Ireland on College Green, he remarked, “crushed angels’ teeth”.

Born the first of seven in the summer of 1945 in the Stella Maris nursing home, Dublin to an eccentric state solicitor, David James Slattery, and his talented wife, a former medical scholarship student, Adeline “Bunty” Slattery (nee Cowell), the young Daithí spent his early childhood among the capital’s Georgian brick streetscapes around their Wellington Road home near the city-centre. Trained by the Jesuits in the class of 1963 at Belvedere College, he showed interest in art and took life-drawing studios at the local College.

His first academic interests – following in his mother’s footsteps – were towards medicine, but he turned towards the study of architecture instead at University College Dublin (UCD). He took leave of absence to earn some money, and returned to Bolton Street College (now Dublin Institute of Technology) in the early 1970s to study under Desmond Dwyer MRIAI, where his interests in diagnostics and the study of the history and rehabilitation of old buildings began to thrive.

During vacation travel to Naxos, Greece with his young wife, Pauline, they met John Freely (b 1926), the American author of the famous Blue Guide to the island and other destinations. Enjoyment of Freely’s apartment there (with an ancient Greek fountain built into the party wall) seems to have sparked Slattery’s life-long interest in specialising in building conservation.

Upon graduation in 1975, at the age of 30, Slattery joined the Office of Public Works (OPW) under chief architect Martin Burke, there first of all to work on the repair of Kilkenny castle and Waterford Courthouse. Burke invested heavily in the talented recruit, sending him to London and York before arranging a two-month-long Unesco fellowship on stone conservation in Venice in the winter of 1979.

Effectively equipped with state-of-the-art knowledge and understanding of his chosen trade, Slattery returned to Dublin in time to act as senior project architect for work on the Customs House. The vast English Portland stone edifice, emblematic of struggles with the British in the 20th century, had suffered terrible damage from corroding iron cramps and spalling stone, and the repair costs looked daunting. But Slattery sought to target and minimise interventions by ingenious (free) use of the Army’s mine detectors; the recycling and renovation of original masonry; and the bold decision to “preserve as found” the grey-coloured Ardbraccan and Ballyknockan replacement stones used in the 1920s restoration of the central tower under the dome.

The re-carving of the building’s British Royal Coat of Arms required diplomacy and a philosophy of intervention that was inclusive of the several strands of Irish culture. The restoration of the carved keystones representing the Irish river gods was more aligned to Slattery’s Homeric interests. When asked what was holding up the building’s immense, overhanging, and badly deteriorated cornices, he quipped, “only the memory of being there.”

Accolades followed with a Europa Nostra award in 1989; the Sunday Tribune Arts Award in 1990; and a Royal Institute of Architects in Ireland (RIAI) award in 1991. At a cost of between £5.5 million and £6 million, the restoration of the Customs House was declared by The Irish Times in 1992 to be “probably one of the most intelligent investments ever made” by the Irish government.

Other work for the OPW included Dublin Castle and Government Buildings – at the cutting edge of international conservation practice.

Never short of an opinion, and always good for a soundbite, he was regularly and widely reported in the Irish media

Slattery then took leave of absence and soon resigned from the OPW to establish his own specialist architectural conservation practice. This afforded the opportunity to work on numerous historic churches (then recovering from the ravages of Vatican II re-ordering), and five cathedrals. Projects included: St Macartan’s, Monaghan; St John’s, Cashel; St Patrick’s, Dublin; St Colman’s, Cobh; and Christ Church, Waterford.

Overseas technical consultancies followed, first for English Heritage, then on the £7 million repair of the 1775 College des Irlandais in Paris, funded by the Irish government.

Having come to architecture late as a mature student, Slattery only joined the Royal Institute of Architects in Ireland (RIAI) in 1988. But he quickly rose to popularity amongst the membership and served on the RIAI Council from 1991-1996. During this period, he was elected to the Institute’s fellowship (1993) for his conservation work on the Custom House.

At the height of his career, contributing selflessly of his time and experience, he served as a minister-appointed member of the Irish Heritage Council and numerous other committees.

In his spare time, he volunteered at the reconstitution of the national committee of the International Council on Monuments and Sites. Never short of an opinion, and always good for a media soundbite, he was regularly and widely reported in the Irish media with eloquent public pronouncements including complaints about damage to historic buildings caused by PVCu replacement windows; inappropriate masonry cleaning caused by “untrained men up ladders”; and primitive dry rot eradication techniques which shared “more in common with the Black Death and the Reign of Terror than modern scientific conservation procedures”.

Through his sound technical advice and interventions, eloquent advocacy, and quick-witted temperament, David Slattery left his mark on Irish architectural heritage conservation in many ways over the last 35 years.

He is survived by his loving wife, Pauline, daughters Kate and Anna, sons David and James and by his brothers John, Paul and William and his sisters Deirdre, Ruth and Catherine.

What are your funeral options if you don’t believe in God?
10